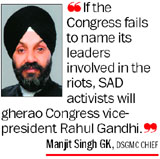 Will intensify stir if culprits not named: SAD

Comments Off on Will intensify stir if culprits not named: SAD 85 Views

New Delhi: Threatening to launch a stir against the Congress, the Shiromani Akali Dal (SAD) Delhi unit and Delhi Sikh Gurdwara Management Committee (DSGMC) today gave an ultimatum to the Congress to name the party leaders, who were involved in the 1984 Sikh genocide. Manjit Singh GK, DSGMC chief, said if the Congress failed to name its leaders, SAD activists would gherao Congress vice-president Rahul Gandhi.

He said this in reference to a recent TV interview in which Rahul Gandhi admitted that some Congressmen were probably involved in the genocide.

Manjit Singh GK, who is also the president of SAD Delhi unit, said if the Congress had some compassion for the minority community, it should name those Congressmen, who were involved in the riots.

Manjinder Singh Sirsa, general secretary of DSGMC, said the Ved Marwaha Commission was told to stop the probe when it was about to highlight the role of top Delhi policemen. The panel was constituted to investigate the riots. “This clearly shows the Congress had planned the genocide,” he added.