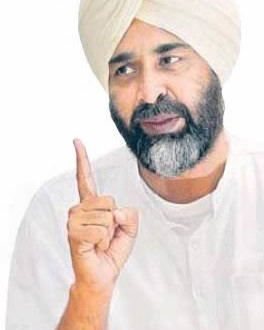 We’ll seek support of every religion, every dera, PPP-Congress

Comments Off on We’ll seek support of every religion, every dera, PPP-Congress 822 Views

Bathinda, Punjab: With the Congress on his side, People’s Party of Punjab (PPP) chief Manpreet Singh Badal is ready to take on sitting Shiromani Akali Dal (SAD) MP Harsimrat Kaur Badal from the Bathinda Lok Sabha seat. Manpreet, who was here to meet senior Congress leaders, told media that he had refused security entitled to him as a parliamentary poll candidate.

Would you seek the support of Dera Sacha Sauda, which has a sizeable following in the Bathinda constituency?
We’ll leave out no section while seeking vote and support. We will visit the doorstep of every religion and every dera. People of Punjab want change and it will come just like new leaves appear after autumn. The SAD is responsible for a large number of Punjabi youth being unemployed.

Why have you refused security?
I feel uncomfortable with strangers. Life and death lie are in the hands of the almighty.

Chief minister Parkash Singh Badal has called you a man of defections.
The SAD is scared of me ahead of the elections. I was a four-time legislator and also the finance minister, besides being the deputy chief minister’s (Sukhbir Badal’s) cousin, but I renounced it all for my principles. Someone who leaves everything for his principles cannot be a defector.

What has Harsimrat failed to do for Bathinda?
On the world map, Bathinda is infamous as the ‘centre for cancer’. Being the deputy CM’s wife and the CM’s daughter-in-law, the powerful member of Parliament could have done a lot for the people. The quantity of drugs supplied in Bathinda and Mansa districts are far higher than in any other part of Punjab.

What are the key poll issues for you?
If I am elected, my first aim would be to ensure rule of law and justice to people. I would also focus on literacy, unemployment and health.