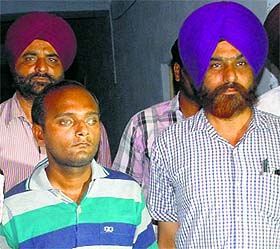 Amritsar, Punjab: The city police today claimed to have arrested a Muzaffarnagar (UP) resident for allegedly making a threat call to Darbar Sahib manager Partap Singh a few days ago.

The accused has been identified as Kamal Verma. Harjit Singh Brar, Additional Deputy Commissioner of Police (Special) said the accused had lost his bag from Guru Ram Das Sarai inside the Golden Temple complex a few days ago. “This prompted him to do something so that the vigil inside the shrine is enhanced and nobody else loses him belongings. He then took the phone number of Darbar Sahib manager from a booklet published by the SGPC and made a threat call,” he said.

The police traced him through the call details. They also managed to get his photograph from his Whatsapp account. He was arrested from Guru Ram Dass Sarai.

Jatinder Singh Aulakh, Police Commissioner, said the accused had been residing at the sarai for the past fortnight. Following the call, security was beefed up around the Golden Temple. The SGPC had restricted the pilgrims from carrying handbags inside the shrine.