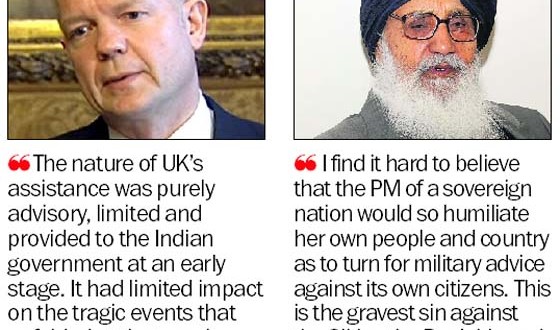 London, UK: The British government has confirmed the authenticity of official documents of 1984 that say a Special Services (SAS) adviser was sent to New Delhi to offer military advice before the storming of the Golden Temple that year.

But UK Foreign Secretary William Hague told parliament in London that the advice was “purely advisory” and given months in advance of the Operation Bluestar.

Hague said an “unnamed British military adviser” sent to India in February 1984 recommended that any attack should be a last resort. The same adviser suggested using an element of surprise, as well as helicopters, to try to keep casualty numbers low, but no equipment or training were offered.

Hague said the Indian plan “changed significantly” in the following three months as a considerably large dissident force had built extensive fortifications on the temple complex.

An investigation into the British role in Bluestar was carried out by UK Cabinet Secretary Sir Jeremy Heywood. It involved searching 200 files and 23,000 documents. Hague concluded: “The cabinet secretary’s report finds that the nature of the UK assistance was purely advisory, limited and provided to the Indian government at an early stage; it had limited impact on the tragic events that unfolded at the temple three months later; that there was no link between the provision of this advice and defence sales and there is no record of the (British) government receiving advance notice of the operation.”

In his detailed report, Sir Jeremy wrote, “Some military files on various operations were destroyed in November 2009. This included one on the provision of military advice to the Indian authorities on their contingency plans for the temple complex. I understand this was part of a routine process.” In response to a query why the UK provided India with advice from a military expert, Sir Jeremy’s report says, “The recommendation and decision to agree to this request was based on advice from the British High Commission that it would be good for bilateral relations.”

In response to another query about the nature of the military advice offered, Sir Jeremy’s report states, “The UK military adviser was in India between February 8 and 17 and conducted a ground recce of the temple complex with the Indian Special Group. This was before-and unrelated to-the exchange of fire between the Indian security forces and the occupiers of the temple complex that started on February 17.

“I have seen the UK military adviser’s visit report and the assessment that he gave to the Indian authorities on February 13. It is clear from this that the purpose of the visit was to advise Indian counter-terrorism team commanders on the concept of operations that they were already working upon for action in the temple complex, including tactics and techniques…I can confirm that the report makes clear that the military officer’s instructions were that no UK manpower or equipment should be offered beyond the visit of this single military adviser.”