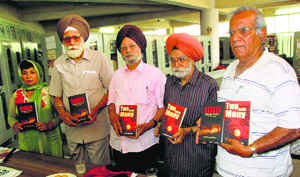 Ludhiana, Punjab: Two books were released by Punjabi Sabhyachar Akademi at Punjabi Bhawan, Ludhiana, last evening. Dr Pritam Singh Kambo, an eminent Punjabi scholar from the UK, published the English translations of his acclaimed Punjabi works. The books titled ‘Banned Punjabi Poetry: A Critical Study’ and ‘Two are not many’ have been translated by Rajinder Singh while Dr SN Sewak and Prof Niranjan Singh Tasneem have written the forewords.

The book ‘Banned Punjabi Poetry’ is Dr Kambo’s research work about the Punjabi poetry written by the Ghadarites in the US and Canada and by the revolutionaries of different shades in India during the freedom struggle. The British Government was so shaken by the impact of these poems on the masses that they arrested many of the revolutionary poets and banned their poetry. Dr Kambo has paid a befitting tribute to these poets in his research work which took him almost seven years to complete.

Meanwhile, ‘Two Are Not Many’ is a collection of his 21 translated stories. He wants the next generations of Punjabis abroad to remain connected with their culture and literature. The young Punjabis in the UK and many other countries do not know Punjabi. They can have a feel and flavour of literature written by senior writers.

Previous: Phoolka back to social work; launches green city projects
Next: Majithia should be exiled for a year: Bajwa