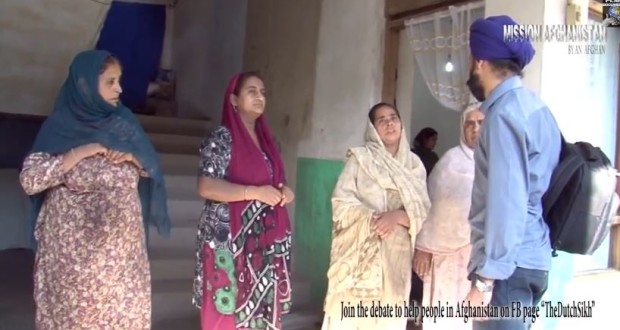 Comments Off on Tough life of Afghan Sikhs – Neglected by Sikh Community 1,386 Views

There is fear and desperation in their empty eyes. They have no livelihood and no work and their growing children receive no education. Their daughters do not have much hope of finding suitable matches and they are not certain where the next meal would come from. Many women and children live in Gurdwar, Sikh place of worship relying on free kitchen

And so, a young adventurous Afghan Sikh, Pritpal Singh, who had left Afghanistan 2 decades ago, set out from the UK to document the suffering of fellow Afghan Sikhs and Hindus communities in Afghanistan. The film MISSION AFGHANISTAN portrays the life and hardships of minorities in War-torn Afghanistan.

Those who could afford it, left the country. Those left behind have hardly any means of support. They have no present and no future.

These are Sikh women with children, widows and families left behind in a war-riven Afghanistan. Together with the Hindu community, their numbers are dwindling, as they live from day to day in many towns in Afghanistan. The situation of women is made worse because this is a conservative country where women are confined to walled enclosures and cannot go out to work.

Even Gurdwara of great historical significance are in a state neglect and disrepair.

The country has been torn apart by war for decades and peace is not in sight when the Americans, British and other foreign troops leave. For minorities like the Sikhs and Hindus, the situation is quite hopeless. As a Sikh lady points out in the documentary, they cannot just depend on short term handouts by generous Sikhs from abroad.

The need is for sustained support projects which set up schools and also provide work for the poorer Sikhs in Afghanistan. Much can be done by the more prosperous business Afghan Sikhs who are doing well in Sikh diaspora countries like the UK, Germany, India, UAE US.

Funded by Gurdwara Guru Nanak Darbar, Southall (UK), Pritpal had only a very limited budget. The main advantage of this low budget but professionally produced documentary was that, with one local cameraman, and dressed as an Afghan fluent in Farsi Hindko, Pritpal was able to merge and mix with communities, and keep a low profile in a highly dangerous environment. Traveling on mined countryside roads, strewn with destroyed army vehicles, he was able to film remote places and intermingle with communities in a war zone. This is a country where tourists make attractive targets for hostage-taking by terrorists, and filming crews have to travel with convoys.

Pritpal returned from this dangerous mission with, in his words, The treasure of well over 1500 photographs and films of key historical Gurdwar, Mandirs Mosques of Afghanistan – something which has never been done in past

Truly, his mission to bring out the truth about the desperate condition of his fellow Sikhs in a country where their forefathers lived for thousands of years, is a remarkable achievement. He loves his country of birth and is concerned that if they migrate to other countries, our history and our historical sites will vanish.

It is a highly informative journalistic documentary. In Hindko, English, Farsi, Panjabi Pashto with English subtitles.