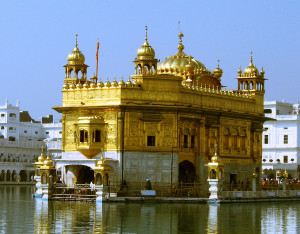 Harmandir Sahib: The Golden Temple Imagine the most beautiful building in the world and then add to that unbelievable beauty with a cover pure gold. But even the richest billionaire on the planet couldn’t buy this exquisite piece of real estate because it’s the holiest site in the Sikh religion.

The opulence of northern India’s Golden Temple of Punjab – aka the Harmandir Sahib – is stunning to behold and has been created over the centuries to glorify God. You don’t have to be wealthy to enter the Golden Temple and this worldwide centre for pilgrims of all religions operates an open door policy for everyone, no matter what their creed or gender may be. Around 100,000 people visit the Golden Temple every day and its kitchens serve at least that many free meals to pilgrims who come to soak up its tranquil ambience.

In this Billionaires Australia guide, we’ll take a look at the history, importance and extreme awesomeness of this fantastic building.

The Harminder Sahib is a Gurdwara, or place of worship, that literally means ‘Temple of God’. It was built on a peaceful lake in Punjab, India, where the founder of Sikhism, Guru Nanak, used to mediate in the 15th and 16th centuries. Its Sikh origins have led generations of Sikh warriors to defend the building’s priceless beauty, creating tales of valour and courage to parallel the temple’s elegance.

Work on the temple started in the 16th century after the lake itself was enlarged into a ‘temple tank’ called a sarovar to surround the holy site. The lake is known as Amritsar, which means ‘pool of ambrosial nectar’ – a magical liquid that was drunk by the gods – and the name was also given to the city that grew up around the temple. The lake is fed by an underground spring where pilgrims go to bathe and symbolically wash clean their souls.

Local landlords gave the land for the temple free of charge and plans were made for the city that now surrounds it. It took seven years to complete the initial work and the foundation stone for the present Gurdwara was laid by Guru Arjan Sahib in December 1588. When the holy scripture of Sikhism was finished in 1604, it was placed in the temple and remains there today. The Harmindir Sahib has four doors, symbolising Sikhs’ openness towards others, no matter what their religion.

The temple was rebuilt in 1764 and again in the early 1800s when the outside was gilded with enough of the precious metal to satisfy even Auric Goldfinger himself. The sublime appearance of the temple glinting in the sunlight gave it the commonly used English name of the Golden Temple.

Protecting Harmindir Sahib
The temple and the Sikh religion were repeatedly attacked by Muslim armies in the 1600s and the 1700s, and the original building was sadly destroyed. But through destruction, it was reborn with more beauty than before.

Today, visitors to the temple can see plaques remembering the historic battles that raged around the building, as well as Sikh martyrs and saints. Commemoration is also held here for all the Sikh soldiers who died fighting in the First and Second World Wars. The Sikh soldiers who fought for the British during these times were handsomely paid, with many receiving payment in the form of pearls that they were able to command on the back of tales of courage and determination, such as the statement that should a Sikh pull his sword out in battle with the a target enemy in sight, he may not return it to its sheath until the blood of that enemy is upon his weapon.

Mention of the temple also tends to bring to mind the efforts of the Sikhs in other battles, such as those who fought to free India from British rule. Despite initially working with the Brits to enforce their foreign rule on India, the Sikhs, after witnessing atrocities committed against innocent women and children, rose up to overthrow the controlling British forces and catapulted Mahatma Gandhi into the position of leader of the free country.

The tireless efforts by the Sikhs to defend a largely Hindu population in India is indicative of a deeper sense of duty inherent within the community. As a warrior people, Sikhs have always lived and died by the sword – but the focus of their battle has always been one of defence. These people have long since worked to defend themselves and anyone in a weaker position that they believe to be in need of help. In ancient times this fearless attitude helped save the Hindu kingdoms, and freed their women and children from the fate of slavery enforced by conquering Muslim armies.

Now, they work to defend their culture and remain ready to fight for their heritage and motherlands whenever the duty should call. The question ‘how to you argue with a man who is ready to die?’ sums up the attitude of these people who carry an endless and fearless love deep within their hearts and bodies.

A final note on the defence of the temple … Such a beautiful and iconic building has warranted the use of a unique martial art: Gatka. A technique and skill that takes years of practice and dedication, but in the right hands, the combined mental and physical strength it requires makes it a formidable force by any standards.

Previous: US Gurdwaras Endorse The Campaign To Change Perception Of Sikhs And Pledge Financial Backing
Next: Gurudwara in Mangalore – Serving religious needs of Sikh community. 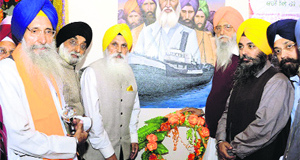