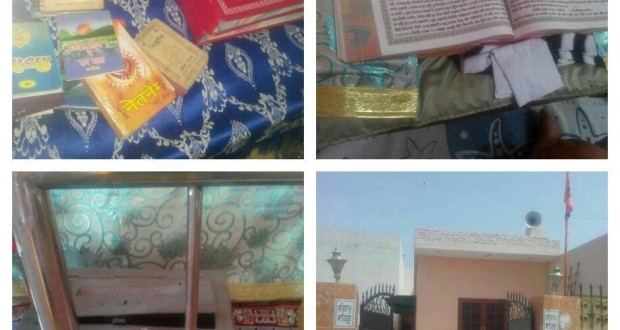 Comments Off on Suspect held in Ambala beadbi case. 680 Views

Ambala, Haryana: The police claim to have arrested one person in connection with the 18 May 2014 incident of sacrilege of Sri Guru Granth Sahib Ji at Shalimar Bagh Gurdwara.

The DCP said raids were being conducted at several places in Punjab and Haryana.

Meanwhile, representatives of several Sikh organisations, including Bhai Amrik Singh from Amritsar, Amarjit Singh of Damdami Taksal , SGPC member Harpal Singh Pali, Sant Singh Kandhari and others, held a meeting at Manji Sahib Gurdwara and gave an ultimatum to the administration that if the culprits were not arrested by May 28 an agitation would be launched the next day.

Earlier, the community had formed an 11-member action committee to put pressure on the administration for bringing the culprits to book.

They added that additional deputy commissioner Aurbind Sharma and senior police officers assured the gathering of strict action and appealed them to maintain calm.

Condemning the incident, in a statement, deputy commissioner Saket Kumar said the administration was serious regarding the matter and nobody will be allowed to hurt religious sentiments of any section of society.

In his complaint with the police on 18 May, Gurdwara Parbandhak committee president Manjit Singh had alleged that sewadar Gurpreet Singh had found the locks of the shrine broken and Sri Guru Granth Sahib Ji and ‘gutakas’ missing and were later found in the bushes some distance from the Gurdwara.