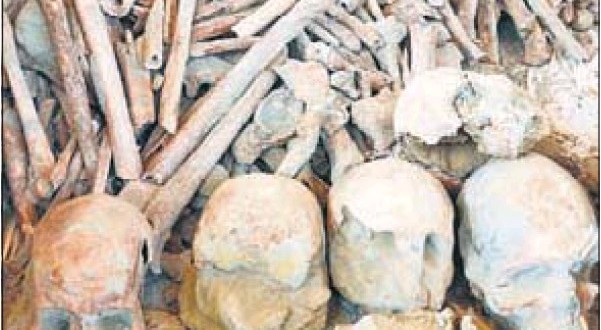 Amritsar, Punjab: With the central and the state governments continuing to be in a sleeping mode over the issue of forensic and DNA tests and preservation of the skeletal remains of 282 martyrs of the Sepoy Mutiny recovered from Kalianwala Khuh in Ajnala, the Gurudwara Shaheed Gunj managing committee has decided to immerse the bloodstained soil recovered from the well in the Ravi on April 13.

The 157-year-old bloodstained soil will be immersed in the Ravi exactly at the same place where nearly 150 injured soldiers of the 26th Native Infantry Regiment were drowned in 1857.

“As the central and state governments have taken no action, the committee has decided to immerse the soil on April 13,”said Surinder Kocchar, a historian, who led the excavation.

The committee has demanded the forensic and DNA examinations of the soil and the skeletal; but according to the committee members, the government is yet to act in this regard. “All that they have done so far in the name of conservation is to send a team led by the civil surgeon, who advised us to wash the skeletons with water, which would do more damage than preserve the fragile and already crumbling skeletal,” said Kochhar.

He said in the absence of concrete action on the part of the government, the committee had preserved a portion the blood-stained soil for testing, while the remaining soil was packed in two containers for immersion.

Kochhar said the government had done nothing to initiate the process of conducting the DNA test, which would have helped identify their kin and answer the queries posed by their descendants in future. He said the issue had garnered attention from across the global and the nonchalance of the central and state governments had invoked the ire of the people worldwide.