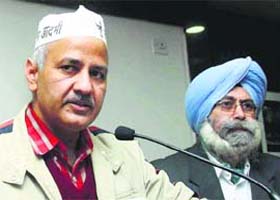 Comments Off on SIT to probe ’84 genocide: Delhi Govt 280 Views

New Delhi: The Delhi Government on Wednesday announced the setting up of a Special Investigation Team (SIT) to probe the killing of Sikhs in the 1984            genocide that were triggered by the assassination of then Prime Minister Indira Gandhi.

Delhi Education Minister Manish Sisodia said the government had given its in-principle approval to the SIT after discussing it with Delhi Lieutenant Governor Najeeb Jung. “The L-G gave a positive response. The proposal will be taken up in the next Cabinet meeting where the modalities of the SIT will be discussed,” Sisodia said. Delhi Chief Minister Arvind Kejriwal had met the L-G today morning to request the setting up of an SIT to probe the genocide that took place nearly 30 years ago. Two commissions of inquiry and seven committees have been set up till date to probe the genocide in the National Capital following Indira Gandhi’s killing by two of her Sikh bodyguards on October 31, 1984. The number of dead is disputed. As per records, 2,773 persons were killed, but the Ranganath Mishra commission – the first set up to probe the genocide – was given names, addresses and details of 3,870 persons killed in Delhi alone.

Senior advocate and AAP member HS Phoolka said the SIT must have non-Delhi Police officers and alleged its personnel had connived with the genocide. Jarnail Singh, the author of ‘I Accuse… the Anti-Sikh Violence of 1984’ said the SIT should be under the Supreme Court. “It makes little sense otherwise as the CBI and the Delhi Police are under the Central Government,” he said.

According to the 2005 GT Nanavati Commission report, 587 FIRs were registered. As many as 241 were closed by the police as untraced and were not sent for trial to the court. “Till now, only 12 murder cases have resulted in conviction. This is a minuscule number keeping in view about 3,000 murders,” Phoolka said.

The Nanavati Commission indicted Jagdish Tytler and found colossal failure in maintenance of law and order in Delhi during the genocide. It expressed dissatisfaction over the role of the then Lt Governor PG Gavai and Delhi Police commissioner SC Tandon. The Commission also touched upon the delay in deploying the Army in the Capital and why it was not moved in on October 31 itself.

The Lt Governor of Delhi has the power to deploy the Army in such circumstances, without waiting for political clearance. The then Lt Governor, PG Gavai claimed he gave the go-ahead to Delhi Police commissioner SC Tandon on the morning of November 1, the day the riots erupted. The Delhi Police is directly under the Central Government.

Earlier this morning, the Delhi Sikh Gurdwara Management Committee (DSGMC) demanded that the Union Government set up an SIT to probe the Sikh genocide.

“There is no need for a SIT probe as several earlier high-level inquiries have pointed towards the role of Congress leaders in this planned mass massacre of Sikhs. The need of the hour is to take exemplary action against Congress leaders involved in this dastardly act so that succour could be provided to the victim families.”

Previous: Akal Takht undecided on action in Patna Sahib clash
Next: No need for SIT: Badal