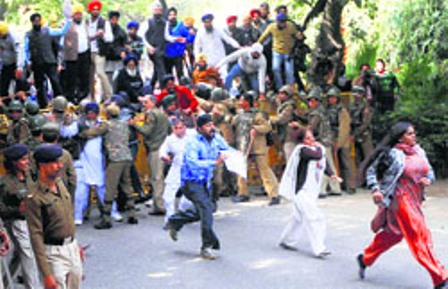 “We want Rahul Gandhi to reveal the names of those involved in 1984 Sikh genocide. We have given him a 72-hour ultimatum after which we will protest outside the Prime Minister’s house,” DSGMC president Manjit Singh GK said.

In a recent interview to a TV channel, Rahul said that “some Congress men were probably involved in the 1984 Sikh genocide.

The protesters, carrying placards and black flags, raised anti-Congress slogans, demanding justice for the genocide victims. The DSGMC served langar to the protesters. “I have seen my son being killed. Why did these police personnel not act when Sikhs were being massacred in 1984? We want the guilty to be punished,” said Lakshami Kaur. The protesting genocide victims demanded ex-gratia relief and jobs.

“In 2005, Prime Minister Manmohan Singh apologised for the genocide and promised an allowance of Rs 715 crore. The ex-gratia grant and compensation for damaged property were also enhanced, but we have received no relief so far,” said Kuldip Singh Bhogal, president, All India ’84 Genocide Victims Relief Committee. Several protesters accused Rahul of “rubbing salt on the wounds of the genocide victims”.

In the interview, Gandhi had insisted that the Congress Government in 1984 had not abetted the genocide but had tried to stop the violence.

Congress leaders Jagdish Tytler and Sajjan Kumar are facing allegations of involvement in the genocide.