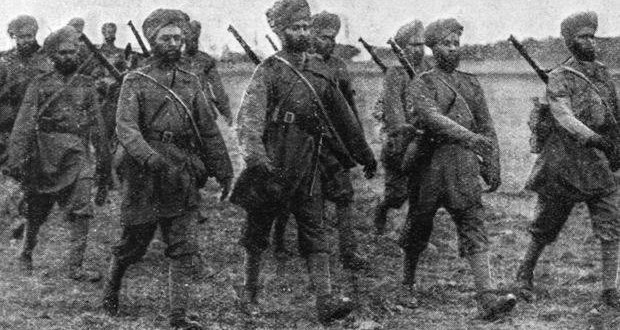 France:‘To show their contempt for death, some Sikhs had refused to hide in the trenches’

The people of the Raj – modern India and Pakistan – were not consulted about their participation in the war. More than 1 million soldiers served overseas in the Indian army – and 75,000 died. By autumn 1914, Indians were on the western front, facing the threat of projectiles like the “Black Maria”.

It was a curious sight to all of us, French or English, the day when the Indians arrived in a dreary little town of Northern France … Suddenly the Indian Lancers appeared, and the pavement on both sides of the street was at once filled by a crowd of soldiers and civilians watching the procession, as a London crowd will do in Whitehall on the day of the opening of Parliament. In fact, those Indians looked all like kings. The Lancers sat proudly in their saddles, with their heads upright under the Oriental crowns; then came a regiment of Sikhs, walking at a brisk pace, all big and strong men, with curled beards and the wide ‘pagri’ round the ears; the Pathans followed, carrying on their heads that queer pointed bonnet, the ‘kullah,’ which reminds one of the warriors seen on old Persian tapestries – a more slender type of men, but equally determined, and with faces at the same time smiling and resolute.

… The day after, we heard that during the night one of the Sikh regiment had had to recapture the trench, which the Germans had taken by surprise, and that their bayonet charge was so tremendous that the enemy did not dare counter-attack. Almost immediately after that feat an order came not to allow the Indians uselessly to expose their lives by walking out of the trenches. The fact was that, in order to show their contempt for death, some Sikhs had refused to hide themselves in the trenches and had immediately drawn a fierce fire on their regiment. Fortunately, they did not insist on playing that sort of game; otherwise the Indian Army Corps would have disappeared in one week’s time out of sheer bravery. […]

A ‘Black Maria’ fell quite near a sapper while he was lying on the ground and steadily firing on the advancing foe. It did not hurt him, but dug a hole six feet deep at his side. The sapper – a Sikh, I believe – waited until the smoke had gone, and then jumped into the hole. He soon found that the position was a comfortable one, and started firing from the cover the Germans had dug for him; according to officers who were standing by, he managed to kill some fifteen or twenty Germans by himself, and would have remained there for ever if he had not been eventually ordered to retreat. He was warmly congratulatedafterwards, but did not appear to think he had done anything remarkable. 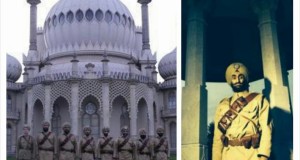