Kisumu, Kenya: The controversial monument erected by the Sikh community in one of the streets in Kisumu has caused jittery among the city residents.

The storm was raised by members of Repentance and Holiness Ministry associated with Prophet Dr. David Owuor who claimed the statue was ‘satanic’.

The monument, erected on top of a rock along Mosque Road on a roundabout, has remained the subject matter in the lakeside city.

Pastor Helen Ochieng of Repentance and Holiness Ministry in Kisumu who led worshippers in condemning the monument said the statue portrays a society worshiping an Idol and it should be brought down.

Ochieng said as Christians they will ensure the monument is erected elsewhere not along the streets of Kisumu.

She asked the authorities who approved the construction of the monument to rescind their decision as its presence will mean doom for Kisumu people.

“Strange happenings in Kisumu are as a result of the presence of the monument. Recently we witnessed a stormy rainfall that caused massive destruction,” she said.

However, Charjeet Singh Hayer, Chairman Kisumu Siri Guru Sabha said the monument has been erected to commemorate 100 years of Sikh presence in Kisumu and has nothing to do with religion.

“I appeal to our religious brothers not to view the monument as idolatry but a sign of peace,” he pleaded.

Hayer said they are celebrating the arrival of their ancestors in Kisumu in the early 1901 and nobody should associate it with idolatry. Residents of Kisumu now fear passing along the street for bad omen.

“Cyclists will have to follow longer routes only to avoid passing through that street. They say whenever they pass there, their business dwindles,” said John Omollo, a cyclist.

Police officers had to use teargas canisters to thwart several attempts by the youths to burn and bring down the monument.

Former Prime Minister Raila Odinga who stepped in to quell tension over the monument failed in his attempt to convince Kisumu residents that the monument erected by the Asian community is a sign of peace.

Odinga visited Mosque Road on Saturday morning but received hostile reception from the irate members of the public who demanded the immediate removal of the monument.

“Listen to me, this monument is for peace and not ‘satanic’ as some of you have been saying,” he said amid heckling from the crowd.

He reminded the people of Kisumu not be pre-occupied with unnecessary things but talk about development.

“We cannot waste time here explaining the meaning of this monument when I have very important matters I want to convey to you,” he said.

Odinga then asked Kisumu county governor Jack Ranguma and the religious leaders to meet on Monday to deliberate over the issue.

The former PM said if it has to be removed then due process must be followed since the county government approved its construction.

Several times the former PM was shouted down as he defended the monument and cut short his speech.

Governor Ranguma admitted that his office approved the construction of a water mountain but the contractors added other images that were not part of what was approved.

He urged the Sikh community to adhere to the approved plan to avoid any misunderstanding.

Ranguma on the other hand reminded all the residents that every citizen has a right to worship in their own way as provided in the constitution.

“I want to request our religious leaders to spearhead the promotion of religious tolerance among the citizens of Kisumu and Kenya as a whole,” he said.

Previous: Sikhs must retain their identity symbols: Khushwant Singh
Next: 1984 Anti-Sikh Genocide – The silence of the police station diaries. 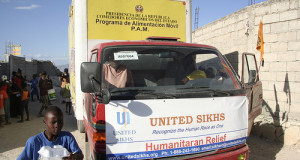