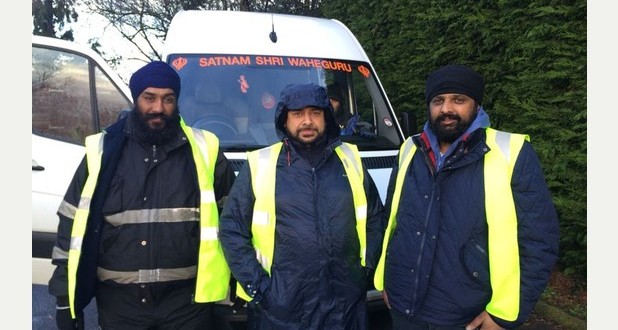 Walsall, UK: An aid mission by a Walsall-based society saw members do a lot more than just save the day when they lent a helping hand to families affected by the Somerset floods.

Because for the hardy volunteers from Midland Langar Seva Society, they rescued personal belongings and even a family’s pet goldfish from the torrid floodwater that has forced dozens to evacuate their homes.

“On a scale of one to 10, I would say the effect it’s had down there is a 10,” said Randhir Singh Heer, founder of the good cause.

“It’s really bad. You would walk into someone’s living room and look out into their garden and it would be like a lake.

By the end of last week, the society – which provides food to more than 300 homeless people per week – had no idea they would even be going to help out in Somerset.

Mr Heer added: “We were originally going to take food to the people, such as sandwiches, curries and rice but we were told that it was not food that they needed – they needed items that would stop the water from getting into homes.”

Within hours, a team of six volunteers had filled up a van with 600 sandbags, hand sanitisers and membrane waterproof sheeting, before hitting the road at 3.30am the next morning.

Their aid work began when they arrived in Somerset just hours later, and soon they came across people who had been badly affected by the wild weather.

“We had to go down a slippery bank and the front garden was there, and the water was all in their lounge, it had been totally flooded.

“The poor guy was in shock at how the water had taken hold of his home. It was horrible.

“We helped move their personal belongings to higher ground.”