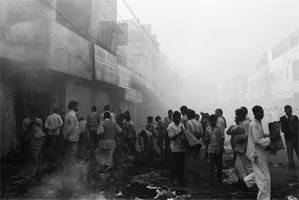 Thirty years after the 1984 anti-Sikh Genocide, a man under trial for murder, arson, looting and other offences, has claimed that he was being “implicated falsely” because his name was same as that of the culprit.

Suresh Kumar (58), who is being tried for the Pul Bangash killings before a CBI court, recorded his statement on Friday. He told the court that he would get two Sikh witnesses to vouch for his identity.

“I am innocent and no such crime was ever committed by me. I have been implicated falsely in this case. I am only Suresh Kumar. The person by the name of Suresh Kumar Panewala is some other person,” the man said.

Panewala, who was never arrested by any investigation agency, was named as a co-accused in the Pul Bangash case by the CBI, which had investigated the case on the recommendation of the Nanavati Commission.

The CBI submitted its chargesheet in 2007 and had given a clean chit to Congress leader Jagdish Tytler who had also been named a co-accused in the FIR. The controversy over the closure report delayed the trial, with a CBI court ordering re-investigation into Tytler’s role, while the trial against Panewala was left hanging.

Meanwhile, the court summoned him as an accused and granted bail due to the delay in the trial. Charges against Panewala were finally framed by the CBI court in 2013.

The accused had raised the issue of his identity during the process of examination of prosecution witnesses as well. According to witnesses called by the CBI, Panewala was a “famous personality” and a “well-known bad character” of the locality around Pahari Dheeraj near Pul Bangash. The CBI has said that he had been identified by the then SHO of the Bara Hindu Rao police station. The investigation agency had examined 17 witnesses in the case, with at least two officers of the local police identifying him as the accused Suresh Kumar Panewala. The then SHO of the police station also gave a written statement to the CBI, naming Panewala, and the accused had accepted the notice to join investigation in 1997.

However, in his statement to the court of Additional Sessions Judge Sanjay Bansal, the accused has claimed that he was “forced to sign the said notice” by the police and had signed “under pressure”.

The accused has also claimed that he was employed with the Railway mail services at the time of the genocide, and had been on duty till late at night on 1 November 1984, following which he had gone to the residence of a Sikh friend in Kishanganj. The court asked Suresh Kumar to file a list of defence witnesses in an application. It will examine the defence witnesses from 24 March 2014.

Nirpreet Kaur, who had lost several members of her family to the genocide and has been actively involved in the campaign for justice for the victims, said “the tactic” had been tried in several cases by various accused.

“This is not the first time something like this has happened. The witness names the accused using a nickname or the locally known name, and the accused argues that it is not his name. It is only a way to delay the trial by another 30 years,” Kaur said.