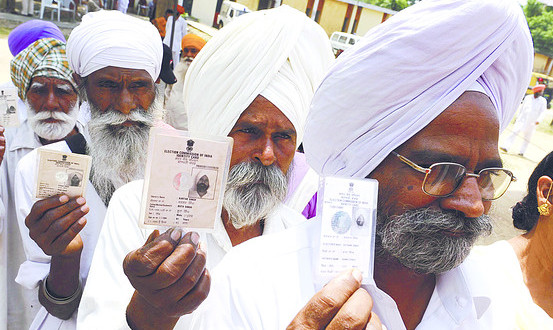 Comments Off on Sikh electorate, a divided lot in West Delhi 769 Views

New Delhi: Sikh voters in the West Delhi Lok Sabha constituency are almost 9.23 per cent. If they exercise their vote en bloc, they may be a deciding factor, but they are divided. Leadership is also divided in the area.

Ajeet Singh, a senior official in Ramgaria Cooperative Bank, said that 60 per cent Sikhs in the constituency are divided, 30 per cent who are Gursikh favour AAP candidate Jarnail Singh while 10 per cent voters are going towards the BJP and the Congress. Sikhs have sympathy with AAP candidate Jarnail as it is who had flung a shoe in a press conference addressed by the Union Minister, P Chidambram, expressing anger against the Congress government for not giving justice to 1984 Sikh genocide victims.

Amarjeet Singh, president of 17th Block, Subhash Nagar, a segment in the constituency, said Sikh voters are in favour of the BJP, candidate Parvesh Verma, who is son of the late Chief Minister of Delhi, Sahib Singh Verma. However, Parvesh did not visit door-to-door in the Sikh-dominated areas. As far as Jarnail is concerned, he has not done any social work in the community. The Congress candidate, Mahabal Mishra, is a sitting MP, but the voters are not happy with the Congress due to inflation and various scams.

JP Singh of Sukhmani Sewa Society is of the view that the community has not recovered from the wounds of the 1984 Sikh genocide. When the voters think of the riots, they lean towards Jarnail Singh.

Oberio Singh, a social worker, said that AAP’s resignation from the Delhi government has angered Sikh voters who do not want to vote for the Congress either due to rampant corruption in the government.

Bhupinder Singh, secretary of the Akali Dal in Fateh Nagar, said he had not yet made up his mind to support any party in the election.

Shiromani Akali Dal (Badal), Delhi, president and DSGMC president Manjit Singh (GK) said Sikhs should support the party that could work out their problems at the national as well as local levels. Only the alliance of the BJP and the SAD is a solution to the problems. “I am hopeful that the issues of 1984 genocide victims would be resolved if the BJP comes to power,” he said.

While the SAD (Delhi) president, Paramjit Singh Sarna, said the rally organised by the BJP and Akali Dal at Fateh Nagar yesterday indicated that Sikhs had distanced themselves from the BJP. There was no rush in the rally. The Congress has developed the area and deserves the vote.