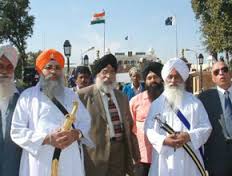 The speakers expressed their displeasure at the Jathedar sharing stage with RSS chief Mohan Bhagwat. They claimed this “exposed his anti-Sikh stance”. They also called upon the Sikh sangat to abstain from his programmes.

The resolution would be forwarded to Akal Takht Jathedar Giani Gurbachan Singh for discussion during the forthcoming meeting of the Jathedars of all the five Takhts. The Sikh bodies stressed for re-evaluation of selection, appointment and working jurisdiction of the Jathedars. They demanded formation of a 21-member committee, which would prepare a report after holding discussions with Sikh intellectuals.

The report would focus on streamlining the appointment of Jathedars, their jurisdiction, working style, which should be free from any external influence, and ways to maintain the Sikh maryada (religious code).