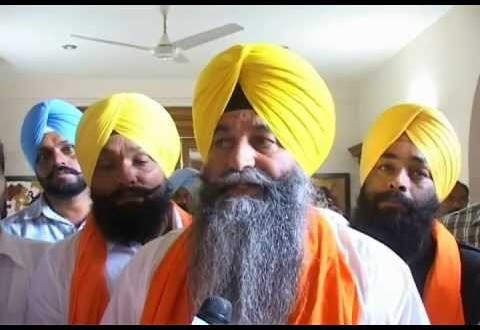 Jalandhar, Punjab: The stage is set for an eyeball to eyeball confrontation between the Amritsar-based Shiromani Gurdwara Parbandhak Committee (SGPC) backed by Shiromani Akali Dal (SAD) and the new Haryana gurdwara panel over the control of Sikh shrines in Haryana.

Haryana governor Jagannath Pahadia had on July 14 given his assent to the bill passed by the state assembly for creating a separate management committee for Sikh shrines in Haryana.

Faced with the prospect of the new committee taking over Haryana shrines under SGPC control, and not %many legal options open to them, SAD and SGPC have decided to execute their %battle plan on the ground to prevent this. The SAD leadership appears to be ready for a showdown with Haryana government as the latter is readying to constitute a committee before the HSGPC election to take charge of state gurdwaras.

With the Union government keeping off the contentitious matter despite repeated pleas by Punjab CM Parkash Singh Badal, the SAD leadership is moving fast to maintain its hold on the gurdwaras of Haryana. SAD’s top brass has ordered SGPC members and other SAD leaders to go to these religious places to maintain actual control.

SAD office has moved an army of SGPC and party men to fortify Haryana gurdwaras.

It is learnt that SGPC members, district unit presidents, constituency in charges of SAD and even circle presidents were asked to leave for Haryana gurdwaras on Wednesday night for deployment by Thursday noon. They have also been asked to take SAD activists along. Several of these leaders and SAD activists have already reached the religious places assigned to them.

“We have been asked to guard these gurdwaras in case the new committee to be formed by the Haryana government tries to take over the gurdwaras. We received instructions from SAD office that we should be equipped to stay there for next few days,” said a SAD leader.

In case the situation takes an unsavoury or clashes take place, it would help SAD garner the support of Haryana Sikhs as well as force the Union government to intervene in the sensitive issue to maintain status quo.