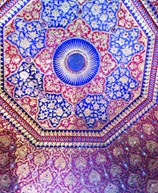 Amritsar, Punjab: The restoration work on the interiors of the sanctum sanctorum at the Golden Temple has gained momentum and has also started showing some positive outcome. At present, the focus is on preserving the wall paintings on the first floor of the sanctum sanctorum and a team of seven experts is on the job. They have cleaned up a part of the roof in a scientific manner, thus restoring its sheen.

After visiting the holy shrine, one can make out the difference with the help of a patch that has been left untouched by the team probably to show the results of the exercise.

Apart from cleaning the roof, the experts are working on restoring the wall paintings with the help of stone colours, which are compatible to the existing ones. The restoration work was preceded by compilation of a detailed damage assessment report in which the entire wall paintings were documented. As the preservation of wall paintings involves intricate work, it will take another few months before it could be finally completed.

Conservation expert SP Singh, who is associated with the project, said they were carrying out the restoration work while ensuring that the originality and the aesthetics remained intact. He said they were currently working on the wall paintings while the detailed project report (DPR) for the preservation of gold work was underway.

The SGPC has already clarified that there will be no tampering with the ancient artwork and all efforts will be made to preserve its originality. Significantly, this is the first time ever that the restoration work on the interiors of the shrine is being done.

The gold-plating and the artwork dates back to Maharaja Ranjit Singh era. The interiors of Sri Harmandar Sahib boast of rare architecture comprising ‘mohrakashi’, ‘tukri’ and ‘gach’ work. The gold-plating has turned black probably due to rising pollution while at a few places, it has lost grip with the walls.

Previous: Will intensify stir if culprits not named: SAD
Next: YAD holds anti-Cong protests across state