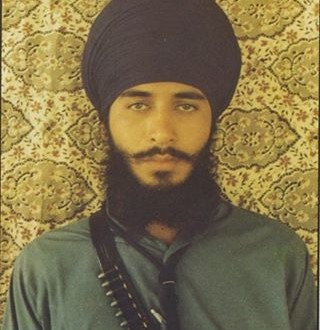 Bhai Surinder Singh Sodhi was the bravest of soldiers of Khalsa Panth in 20th century, forever ready to lay down his life for Panth, always tyar bar tyar to punish any Panth-dokhi, guru-nindak and carry out justice for Shaheed singhs who were killed in illegal police custody or encounters.

Bhai sahib had darshan of Sant Jarnail Singh ji Khalsa in 1980. He was with Misal Shaheeda Tarna Dal, Harian wela then, doing sangat of Baba Nihal Singh ji. His close friend, Bhai Manbir Singh chaheru, had joined Taksal in 1980 and Sodhi had gone to Tarna Dal, but soon he joined ranks of Sant Jarnail Singh ji Khalsa and vowed to remain with him till his last breath. He was a Charhdi Kala Gursikh, jovial, helpful and always imbued in Naam Baani. He carried out ‘Chalisa’ in Parikarma of Sri Harimandir sahib and had an 8 hour long Nitnem. He went in Samadhi many times during those years, getting up after 3-4 days. A heavenly fragrance was always emanating from his body, as was the case with Sant ji too. Gursikhs who have been with him told me that he was the one loved most by Santji, for his Spiritual awastha, his dedication, his love. Every word of Santji was like God’s command for him. He had piercing eyes, capable of seeing inside the mind of next person. No traitor ever passed his glance. He was a Handsome Gursikh, and Santji called him ‘Babbu’ with love. Whole Jatha of Damdami Taksal loved him, respected him and listened to his orders. From 1980 to 14th april 1984, he remained a dedicated soldier of Khalsa Panth, punishing traitors of Khalsa Panth.

Bhai Surinder Singh ji Sodhi, The Brave heart was once given a special message by Santji to be delivered to a Singh in a nearby village. But there was police cordon around Sri Amritsar and no one could pass without being checked. Sodhi took one of the most extraordinary routes to that village, he took his favourite ‘’Bullet’’ motorcycle on the railway tracks and drove it on tracks to reach that village. Villagers around Amritsar who had seen this feat still remember the day Sodhi did this, For Santji.

He was the one who got inside Punjab legislative assembly and shot secretary of Punjab Government who had issued oppressive orders against Panthic Singhs. BJP MLA, Harbans laal Khanna, who had carried out a violent procession of Hindus in Amritsar, which broke Model of Sri Darbar sahib at Amritsar railway station, threw cigarettes in face of Guru Ram Daas ji’s photo and gave out slogans like ‘’ Kacchh Kara Kirpaan, ehnu bhejo Pakistan’’, Dukki tikki rehan nai deni, Sir te Pagri rehan nai deni’’, was punished by Bhai sahib ji in a week’s time, when he was sitting in his shop with his bodyguards. Other singh involved in this action was Bhai labh singh ji.

List of Bhai sahib’s courageous acts is very long, and I’ll share with you all in due time. Bhai sahib ji was the most trusted soldier of Santji and never went against his orders. Enemy of Sikhs, Bhajan laal who had committed atrocities on Sikhs and got Sikhs killed in panipat was on the Hit-list of Singhs. Sodhi was sent for this mission by Santji, but on a condition. He was to shoot Bhajan laal ‘only’ if he could make it back to Santji. Sodhi, guised as a Navy officer, reached his office, sat with him and had tea. There were policemen and commandoes all around Bhajan laal. Sodhi called Santji and said it’s my last Fateh. I’m going to finish the Dusht but I’m not coming back. Santji ordered him that very moment to abort the mission and return, as he was needed. Sodhi had to return that day, and this showed how much Love and affection they both had for each other. Santji used to say ‘’ He is my son, not only in this life but from ages’’.

Enemies within Sikhs, people like Longowal, Badal were working against Santji. They comspired to get Santji and Sodhi killed. Assassins were paid Rs.50 lakhs for killing Santji and 25 lakhs to kill Surinder Singh Sodhi. Government agencies wanted Sodhi out at any cost. They knew how much important he was for Sant Jarnail Singh ji, how he was his right-hand man, his trouble-shooter. They planned to handicap Santji by killing Sodhi. There was a big fear among agencies, as they knew that Surinder Singh sodhi was trained in Anti-tank mines and Anti-tank missiles. In case of an operation by the Army, he would have proved a big hurdle in getting to Santji and Akaal Takhat. So Longowal, his secretary Gurcharan, and Agencies of government paid 25 lakh rupees to a known smuggler Surinder Shinda and his keep baljit kaur. On 14th april 1984, Baljit called Sodhi to a tea shop near parikarma on pretext of sharing her problem with him, as she had convinced him that she looked upon him as her brother and wanted him to rescue her from the custody of Shinda. As Sodhi came in tea shop and sat, she started talking. Shinda appeared and shot bullets in Bhai sahib’s chest, but he didn’t fell and tried taking out his revolver. Then both of them shot at Bhai Sahib from their revolvers. Bhai sahib took 12 bullets in his body and fell down. As he lay in pool of blood, the assassins ran away. News of Sodhi’s Shaheedi spread like a jungle fire, and Santji was deeply pained. His words were ‘Today my Right arm has been cut, I’ve lost my beloved son, my Tiger has been killed, but killers should remember, I’m still alive’’. A plate was hanged on the door of Guru Ramdas langar, on which Sodhi’s killers were promised to be punished in 24 hours. And Singhs did take revenge of Sodhi’s shaheedi in 24 hours, punishing all the people involved in Shaheedi of Bhai Surinder singh Sodhi.

Bhai sahib’s life is an example of spirit of Khalsa. In 18th century, it was Bhai Sukha Singh, who is still remembered for his brave and daring acts, for punishing panth-dokhis. Bhai Shaib was Sukha Singh of 20th century. He was a true soldier, A Sant, gurmukh, Abhyasi of Naam baani, believed in Panthic unity and ever ready to lay down his life for cause of panth. His name struck fear in hearts of enemies of Panth, and a wave of Charhdi kala in minds of gursikhs. He’ll be an inspiration for Sikh youth for ages to come. Khalsa panth will always remember ‘Tiger of Santji’ for his Supreme Sacrifice. Sri Akaal ji Sahai