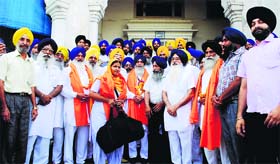 Comments Off on SGPC jatha leaves for Pak 500 Views

The jatha will visit historic gurdwaras in Pakistan and observe the birth anniversary of Maharaja Ranjit Singh at Dehra Sahib gurdwara in Lahore on June 29.

They will return on June 30. SGPC member Gurmeet Singh said the pilgrims would pay obeisance at various historic shrines such as Nankana Sahib, Panja Sahib and Sacha Sauda Sahib.

He said visa norms should be relaxed for pilgrims and the issue was taken up by SGPC chief Avtar Singh Makkar with the Pakistan government during a visit to pakistan recently.

Additional SGPC secretary Diljeet Singh Bedi said they had sent a list of 215 pilgrims for the visa but the names of 20 persons were struck down by the Union Government and the Pakistan High Commission.

He said Pakistan should grant the maximum possible visas to the Sikh pilgrims from India.