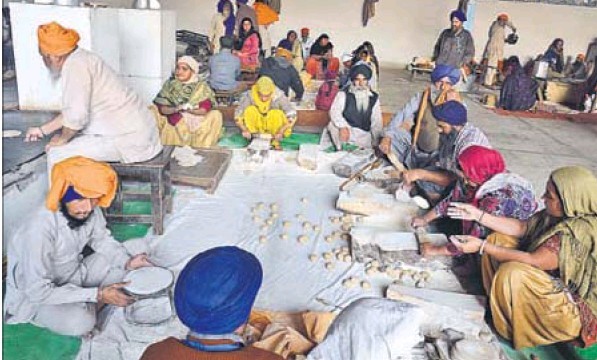 SGPC demands subsidy in LPG cylinders for its langars

After the hike of ` 220 for an LPG cylinder, a worried Shiromani Gurdwara Parbandhak Committee (SGPC) has shot off letters to Prime Minister Manmohan Singh and union petroleum minister Veerappa Moily demanding cooking gas cylinders at subsidised rates for running langars.

Keeping in view the considerable financial implications for the religious body, Shiromani Gurdwara Parbandhak Committee chief Avtar Singh Makkar has raised this demand for LPG cylinders they use at the Guru Ram Dass langar (community kitchen) of the Golden Temple and other langars in various shrines under its control, where lakhs of devotees partake food every day.

Before the hike, the Shiromani Gurdwara Parbandhak Committee was paying Rs 1,086 per domestic cylinder without any subsidy. Makkar has pointed out that the hike of ` 220 per cylinder would further burden the religious body. Several crores are spent on the cooking gas by the SGPC for its shrines.

“Lakhs of devotees partake langar at the Golden Temple and other shrines every day. Langars are a part of Sikh tradition. We make an appeal that subsidy should be given on cylinders supplied to the SGPC,” Avtar Singh Makkar stated in his letters to the Prime Minister and petroleum minister Veerappa Moily.

At the Guru Ram Dass langar in the Golden Temple, the SGPC uses an average 90 domestic LPG cylinders a day. Besides, about 60 quintals of wood is also used each day.
At ` 1,086 per cylinder (old rate), the SGPC had to spend around Rs 97,740 per day. The SGPC is trying to do away the use of wood as fuel since it causes much pollution, thus affecting the gold plating and marble at the shrine.

The use of wood fuel was found to be a major reason behind pollution around the Golden Temple by a team of IIT-Delhi which was entrusted with the task of identifying causes of pollution and also to suggest alternatives to lessen this problem.

Rough estimates by the SGPC suggest that if the use of wood is stopped completely, about 135 LPG cylinders will be used at the Golden Temple langar in a day. The SGPC uses around 400 cylinders a day in the Golden Temple and other important religious shrines under its control in Punjab. The SGPC is visibly worried about the amount of money it has to spend on the purchase of LPG cylinders for the free kitchens run by it.