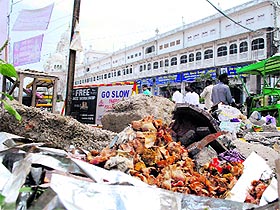 Amritsar, Punjab: Even as the SGPC has temporarily deferred its cleanliness drive around Golden Temple in the wake of Parkash Utsav of Guru Granth Sahib tomorrow, yet it has already prepared its special task force to carry out cleanliness in and around the Golden Temple galliara after two days.

The MC too has offered its services and introduced amendments and additions in its cleanliness job during deliberations held between SGPC chief Avtar Singh Makkar and MC Commissioner Pardeep Sabharwal a couple of days ago.

SGPC chief Avtar Singh Makkar said the cleanliness drive which was scheduled for tomorrow has been postponed as the staff would be busy in the preparations of the Parkash Utsav.

Under a special cleanliness drive, the SGPC has given a call to the residents and volunteers to join hands in its move to make the surroundings of Golden Temple spic and span.

The residents have been told to collect their domestic refuse in polythene bags, only to be handed over to the SGPC’s sanitation team who would be making rounds of the streets twice or thrice a day.

“Otherwise, we have already done our homework for the cleanliness drive. A task force of 20 dedicated persons would be there for the removing garbage. Our focus will not only to clean the galliara area but also to approach the streets that lead to the shrine. We have been assured by the MC officials for all cooperation. Even if need be, we will be providing garbage collection bags to the residents too,” he said.

Initially, four major areas will be on the MC’s work list. They are the approach road from Hall Gate to the Golden Temple, the Golden Temple to Sikandri Gate; and Ghee Mandi to Sheranwala Gate.

Besides this, workforce of around 40 safai karamcharis, 18 new dustbins, two auto-rickshaw garbage carriers, four garbage collecting tractor-trolleys have been spared for the service. Besides this six cycle rickshaws and 10 handcarts too would be pressed into service.

MC Commissioner Pardeep Sabharwal said with the SGPC coming in to this, the results would be multi-times better.

“I believe that if the residents themselves imbibe in them a civic sense to honour others’rights and make it their point not to litter the surroundings, it would be an added advantage to maintain hygiene. SGPC’s reach among the residents is immense and beyond doubt, I can say that it would be helpful in transforming their nature. Our cleanliness schedule would be from 6 am to 2 pm and from 2 pm to 10 pm. We would be stick to this timetable until unless there is some extreme emergency like rain or so,” he said.