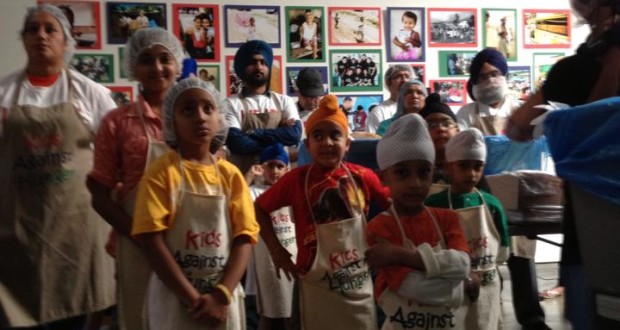 How central is feeding people in Sikhism? So central that one of the core operations of Sikh Gurdwaras – temples – is the Langar, or “free kitchen,” where all are welcomed to share in community meals.

So it makes sense that for its Day of Service (Seva) on Aug. 2, the Silicon Valley Gurdwara of Santa Clara joined with the Western Region Sikh Coalition and Kids Against Hunger Bay Area to pack 10,000 meal packages for starving and malnourished children around the world – including some right here in California.

The formula for meal packages, which feed six, was designed by the non-profit Kids Against Hunger (kidsagainsthunger.org) to provide optimal nutrition, palatability and ease of preparation as well as long shelf life. In 2013, the organization distributed 40 million meals around the world, according to its website.

The Sikh community held the service day to mark the second anniversary of an attack by a lone gunman on an Oak Creek Wisconsin Gurdwara that left six people dead and others wounded. “In Santa Clara, sevadaars (volunteers) from all backgrounds and organizations participated in the Day of Seva, packing meals with Kids Against Hunger,” says event director Harbir Bhatia.

Sikhism is a monotheistic religion that dates from the 15th Century, founded by Guru Nanak in the Punjabi region of India. It’s the fifth largest religion in the world, and follows a core of teachings established by its first 10 gurus from 1489 to 1709. As well as its focus on community service and optimism as a doctrinal mandate, Sikhism is also distinguished by its egalitarianism, emphasis on the centrality of music in worship and its acceptance of the validity of other religions.