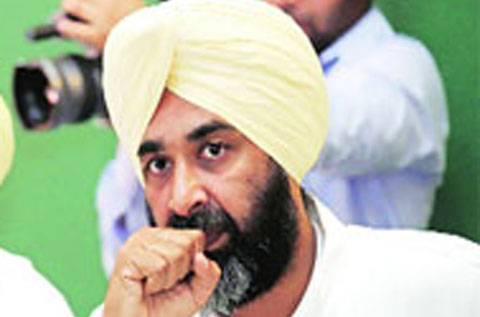 Chandigarh: Decrying the Panthic agenda being followed by the SAD, PPP chief Manpreet Badal today asked Chief Minister Parkash Singh Badal and SAD president Sukhbir Badal to clarify whether their party was a secular or a communal outfit.

In a statement, Manpreet said Badal must clarify the SAD’s stand before launching protest against the Sikhs of Haryana. He said the SAD was allegedly following two constitutions.

“As a secular party, the Akali Dal is not supposed to indulge in religion-based politics, as per the Election Commission guidelines. But the SAD has been violating norms by opposing the formation of a separate Haryana Sikh Gurdwara Committee, which is a religious matter,” he said.


Manpreet alleged the SAD had been claiming that it had shed its Panthic agenda, and was only pursuing development, “but that the latest turn of events spoke otherwise”.

“What is all the more contentious is that it is for the first time that the Akali Dal will be launching an agitation against the Sikhs themselves, though in the neighbouring state. The decision defies logic and is highly reprehensible,” he said.

Manpreet also flayed the Narendra Modi government for impinging upon the federal spirit of the constitution by asking the Haryana Governor to withdraw his consent to the Haryana gurdwara Bill, which he had already signed. “This has never happened in the history of independent India,” he said.

Previous: Sikh scholar discusses the history of the Akali Nihangs
Next: Akali Dal back to its Panthic agenda