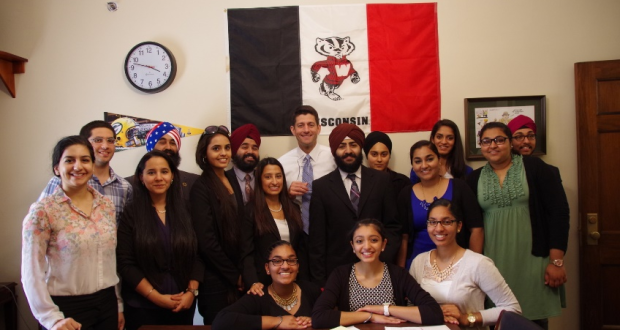 Comments Off on #RememberingOakCreek Together 392 Views

Oak Creek, Wisconsin: Two years ago on August 5th 2012, the Sikh community in Oak Creek, Wisconsin, stood in silence as a lone, white supremacist gunman fatally shot and killed six innocent members of the Sikh faith, while also shooting himself. The massacre was one of the largest acts of violence on a faith community since the 1963 Church bombings.

The events of that day have had a colossal impact on those who were present at the scene, as well as the global Sikh community. Sikhs around the world have stood side-by-side to educate others on a faith that has been misunderstood for far too long, especially after the events of 9/11. As we remember the victims of the tragedy, we also remember how the Sikh community assembled and spread the message of forgiveness and egalitarianism-while also advocating for a change within the policy structure in the United States.

Since the shootings, Sikh Americans have risen from beneath the ashes and have taken this opportunity to portray Sikhs in a positive manner. One of the victims’ sons, Mr. Pardeep Kaleka has been working with a former white supremacist and speaking to the youth about battling hate of all forms. Furthermore, Mr. Harpreet Saini, whose mother was also a victim, became the first Sikh in U.S. history to testify before Congress in a historic Senate hearing.

On May 21, 2014, UNITED SIKHS held its Global Report launch event in Washington, DC where Oak Creek’s Congressman Paul Ryan was presented with our Civil and Human Rights Global Report, which outlines the tragedy of August 5, 2012 in Oak Creek. The presentation to Congressman Ryan held as a reminder that our efforts are on-going as we remember the melancholy felt by Sikhs across the globe.

In addition, last week our Advocacy & Humanitarian Aid Academy workshops engaged our students in dialogue to discuss what it means to serve the community and how they felt after the Oak Creek Massacre. Our students expressed their sadness and how it turned into passion and a drive to learn more about Sikh issues and how they can help the Sikh community. With that fervour, our Academy students, volunteers, and staff met with thirty congressmen, NGOs, and government agencies to educate and understand where we stand with Sikh civil rights issues. This included meetings Wisconsin’s Congressmen Paul Ryan, Reid Ribble, and Thomas Petri.

With the anniversary of the Oak Creek shootings on everyone’s mind, the response was overwhelming. An original meeting intended for five attendees to meet with Congressman Paul Ryan, became a meeting of twenty Sikh community members, Academy students and staff, packing a small room to speak with Congressman Ryan. One-by-one, the community expressed their concerns, from Oak Creek, to our civil and human rights. Congressman Ryan was engaged in deep dialogue and encouraged to advocate for the Sikh community in his district and around the country.

Meetings with Congressman Ryan, Congressman John Garamendi, Congresswoman Judy Chu, Congressman Reid Ribble, were also met with encouragement and gratitude for co-sponsoring House Resolution 698, which condemns the attack that occurred at the Oak Creek Sikh Gurdwara on August 5, 2012, and honors the memory of those who died in the attack. It is such recognition that reminds our lawmakers and other communities of our struggles, pain, and efforts.

Around the country, Sikh-Americans are marking a day of tragedy with a day of commemoration and seva (selfless service). Instead of embracing the ideals of hatred and anger, our community has turned a negative into a positive by building new relationships with other minority communities, creating dialogue with vital lawmakers, and continuing to embody our Guru’s message of Chardi Kala. We are a strong community, filled with hard working, passionate, caring, and selfless individual stories.

Today, we remember the victims of the shooting, as well as the struggles and achievements of Sikh Americans.

Today, we ask everyone to Recognize the Human Race as One.