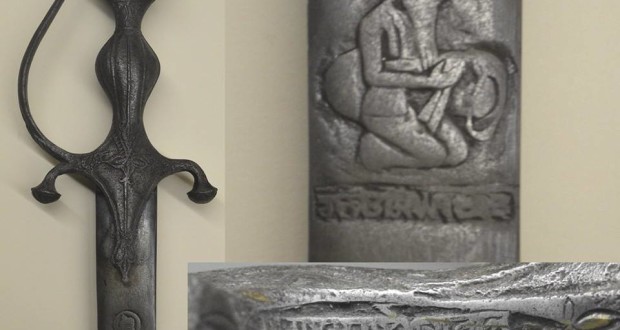 Ludlow, UK: A recently discovered early 19th century Indian sword bearing on its blade a silhouette of Maharajah Ranjit Singh – the legendary ‘Lion of the Punjab’ – goes under the hammer later this month in Ludlow, Shropshire (English Midlands).

This most exquisite find comes from a British family of military descent and is inscribed in the hilt in Gurmukhi ‘Ranjit Singh Lahore’ and dated. As such it could prove to be one of the most significant Sikh artefacts to come to light in recent years.

‘The sword was brought into us for inclusion in our regular sales of important Indian documents and artefacts and it was originally thought to be an Islamic sword belonging to a Moghul Prince,’ said Richard Westwood-Brookes of Auctioneers Mullock’s who will sell the sword on Tuesday March 18th.

‘However, once we had researched the design it became obvious to us that it was a potentially unique piece, with historic connections to the most famous of all the rulers of the Punjab.’

The sword – known as a ‘Tulwar’ – could possibly have been a gift to the Maharajah himself or presented by him to a fellow noble at his court in Lahore.

‘The fine craftsmanship on the sword indicates that it was certainly of a very high status, and there are also indications that when it was first made, the hilt was covered in gold and as such at the time of the Maharajah it must have been a most spectacular piece,’ added Richard Westwood-Brookes.

‘Items which date from the time of the Maharajah and bear indications of a direct link to him are obviously of the greatest rarity, and we are expecting great interest from around the world.’

Maharajah Ranjit Singh was the founder of the Sikh Kingdom in the Punjab and ruled for 40 years. His Kingdom was annexed to British dominions after the Anglo-Sikh Wars and his infant son, Maharajah Duleep Singh was removed and sent to England where he lived the life of an English Gentleman.

The Mullock’s sale features more than 100 lots of important Indian items, including a military bugle with a letter from the bandmaster of the Kashmir State, saying that it was used in the army of Maharajah Ranjit Singh.

Also in the sale is a rare copies of the Chronicles of the Lahore Durbar, the Travel Memoir of Godfrey Vigne to the Court of Ranjit Singh and a two volume set of ‘A Year on the Punjab Frontier’ by Herbert Edwardes which belonged to Sir John Lawrence, Viceroy of India from 1864-69, and containing handwritten notes by the author’s wife.

The sale also features rare photographs and documents of the Punjab States, and important documents including a memorandum on the widow and son of Maharajah Sher Singh and a rare first hand account of the Indian freedom fighter Bhagat Singh written by his colleague in 1945.