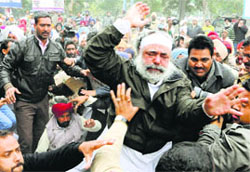 Amritsar, Punjab: A scuffle broke out between policemen and Congress leaders protesting against Revenue Minister Bikram Majithia near his residence here today. The police had to resort to a mild lathi charge to disperse the agitators and stop them from moving towards the minister’s house in Green Avenue.

In the melee, the turban of senior Congress leader SRS Lalli Majithia came off which led to heated arguments between the police and the agitators. Lalli also sustained an injury on the nose. He was later rushed to a private hospital after his condition deteriorated. His condition is stated to be stable.

Earlier, Congress workers gathered at Ranjit Avenue’s B Block market and burnt an effigy of the minister. They demanded Majithia’s expulsion from the Cabinet and a CBI probe into the drug racket. They raised slogans against him and the Punjab Government for “shielding” him.

PPCC president Partap Singh Bajwa, in a statement issued later, condemned the police action on the protesters. He alleged that Congress workers were beaten up without any provocation. “The party will continue protests till a CBI inquiry in the drug racket is announced,” he said.

Jatinder Singh Aulakh, Police Commissioner, said Lalli, who was a heart patient, was taken to the hospital due to his medical condition by the police. He claimed that Congress leaders had started the scuffle.

Muktsar: Congress activists burnt an effigy of the Revenue Minister at Lambi village in Muktsar district, demanding a CBI probe into his alleged role in the drug trade in Punjab.

Moga: Hundreds of Congress workers gathered at the national highway on Wednesday and burnt Majithia’s effigy for his alleged role in the drug trade. They raised slogans against the Chief Minister and Deputy CM for “shielding” Majithia and demanded that the CBI be asked to look into the matter.