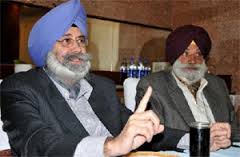 Phoolka writes to CM over ‘false propaganda’ against him

Ludhiana, Punjab: Aam Aadmi Party (AAP) candidate from Ludhiana HS Phoolka has written a letter to Chief Minister Parkash Singh Badal to complain about the “false and malicious propaganda” being carried out by the Shiromani Akali Dal (SAD) against him in connection with his work for 1984 genocide victims.

Alleging that it was a conspiracy to malign his name, Phoolka has written that it is being done to distract him from his election campaign.

He wrote: “Your party (SAD) has got reports printed in newspapers stating that I have withdrawn the case of the main accused in the 1984 riots, Jagdish Tytler. It is also stated that a witness in the case, Jasbir Singh, was to come to India to record his statement on April 3. These statements are completely false and baseless.”

The AAP leader stated, “Jagdish Tytler was given a clean chit by the CBI and his file had been closed. I filed a petition in court on behalf of victim Lakhwinder Kaur against the clean chit given by the CBI and we won that case. The case was reopened by ADJ Anuradha Shukla, renouncing the CBI’s clean chit and directing the CBI to continue their investigation against Tytler. Tytler then filed an appeal in the High Court against this decision. However, we argued the matter and ensured that he is not given any stay in the case. The next date in the case is April 17. It is to be noted that as the CBI investigation is still on and the challan has also not been filed yet, no witness can be examined.”