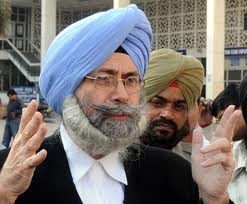 Ludhiana, Punjab: HS Phoolka, Aam Aadmi Party (AAP) contestant for this parliamentary seat, on Thursday appeared before the Delhi high court in a 1984-genocide case, proving that his fight against Congress leader Jagdish Tytler was not over.

After the lawyer appeared before justice VP Vaish, he said it had dispelled the Akali rumours that he had withdrawn from this battle for justice. The pending matter was adjourned to May 29 after Phoolka requested for long argument.

Another matter relating to the massacre of Sikhs in 1984 was listed in the Delhi high court. This was an interim bail application by Balwan Kokhar, co-accused with Congress leader Sajjan Kumar.

Phoolka appeared in this matter as well and the hearing was adjourned. Phoolka argued both cases.