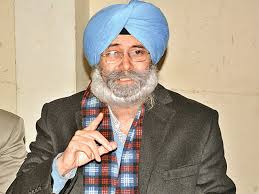 Chandigarh: The Aam Admi Party (AAP) candidate from Ludhiana, Advocate HS Phoolka has complained to the Punjab Chief Electoral Officer (CEO) on the “blatant and flagrant violations of the model code of conduct by the SAD”.

The complaint reads: “The SAD has pasted more than 5 lakh posters on market walls, homes and public buildings. In addition, more than 50,000 hoardings of size ranging from 10ft x 5 ft to much larger size have been installed across the constituency. As a matter of fact, there is hardly any colony in the entire constituency that has not been defaced by the SAD’s campaign material.”

The complaint further read that campaign material had not only been pasted on private buildings, shops, houses and hoardings, but also on public places and property. “Even religious places have been targeted. Huge hoardings of the SAD have been put up outside major gurdwaras of the city and posters have been pasted on gurdwara walls.”

Prove what you did for ’84 genocide victims: Phoolka takes on SAD