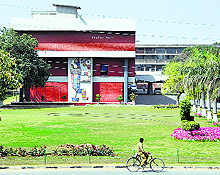 Comments Off on Phoolka a farm varsity alumnus 673 Views

Ludhiana, Punjab: The announcement that senior Supreme Court lawyer and Aam Aadmi Party leader Harvinder Singh Phoolka would be the party candidate from Ludhiana has brought cheer to the Punjab Agricultural University (PAU) fraternity. Phoolka has done his BSc (Agriculture) from the PAU and has a big circle of friends and classmates in the city.

Phoolka, who hails from Bhadaur in Barnala district, joined the BSc (Agriculture) course at the PAU in 1971 and passed out in 1976.

Speaking to The Tribune, Sarabha Nagar resident Avtar Singh Dhindsa, who is Phoolka’s classmate as well as close friend, said at that time the BSs (Agriculture) was a five-year course after matriculation and a four-year one after prep.

“Harvinder Singh Phoolka joined the five-year course of BSc Agriculture while I pursued the four-year course. He used to stay at a room in Kairon Kisan Ghar, which, at that time, was a hostel. Ever since we finished our degrees, he has been like a brother to me,” said Dhindsa, a progressive farmer and president of The Asia Pacific Seed Association.

Harvinder Singh Phoolka belongs to the Phoolkian dynasty’s Bhadaur chiefs, which is a senior branch of the Patiala royal family.

Previous: Sikhs step up protest over Britain’s involvement in Amritsar massacre
Next: 2,500 cops to be deployed at Hola Mohalla