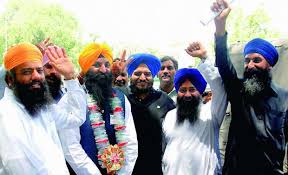 Comments Off on Pakistani Sikhs welcomed in Machhiwara 450 Views

Machhiwara, Punjab: A group of Pakistani Sikhs from Hasan Abdal were greeted warmly by the Sikh sangat of the area along with some leaders of the Akali Dal including circle president Harjit Singh Sherian, Harjatinder Singh Powat and others.

The jatha of as many as 165 persons led by Jathedar Santokh Singh and Wazir Singh Pishor consisting of women and children, were in the town to pay obedience to the Almighty in the gurdwaras.

They also urged the governments of both the countries to make the process of attaining visas a simpler process. They alleged that they had been waiting for the visas from past 14 months, but they got it now. The visitors demanded that the visas should be given on the spot without any delay so as to bring both the countries closer.