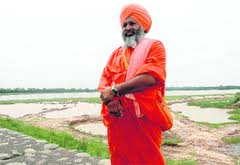 Jalandhar, Punjab: Environmentalist Sant Balbir Singh Seechewal is all set to bag another international honour for his services in environmental conservation.

Sant Seechewal will be honoured by the Punjabi Council of Australia on May 8. He will receive the honour at a ceremony at the Parliament House in Sydney, Australia. Michhelle Rolland, MP for Greenway, will be honouring him.

Maninder Singh, president, Punjabi Council of Australia, said the honour ‘Maan Punjab Di’ would be conferred on the environmentalist. He said the way in which he had worked for the conservation of the Kali Bein and the way he had been associated other people in it had set a precedent in the world.

He said the challenging work of the cleansing of the Kali Bein was a milestone.

Seechewal will stay in Australia til May 22. He will be visiting Melbourne, Perth, Sydney, Canberra and Woolgoolga cities where Punjabis have been living for the past 150 years. At the Sydney International Airport, Seechewal was accorded a warm welcome by members of the council and other Punjabis, including, Varinder Singh Bajwa, Prabhjot Singh Sandhu, Comrade Ajit Singh, Talwinder Singh Jagraon, Harkirat Singh Sandhar, Jaideep Singh and Armaan Singh, settled in that country. Advocate Balbir Singh Biling was accompanying Seechewal during his visit.

Previous: The Battle of Muktsar – Shaheedi of the 40 Muktey
Next: Theatre’s literary history languishes in Amritsar’s bylanes