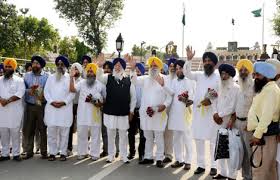 Amritsar, Punjab: Following a phone call from the Jammu and Kashmir chief minister to his Punjab counterpart, the Shiromani Gurdwara Parbandhak Committee (SGPC) on Friday sent langar (food prepared in community kitchens of gurdwaras) for around 50,000 floodaffected people of Srinagar.

Omar Abdullah, J&K chief minister, had on Thursday made a telephonic request to Punjab CM Parkash Singh Badal, for the langar. He had asked Badal to request the SGPC authorities to send food for thousands of starving families of the flood-hit state.

The langar was sent from the Sri Guru Ram Dass Jee International Airport at Rajasansi by a regular flight of SpiceJet airways. SGPC sewadars were on board.

The food items were prepared by devotees at the Sri Guru Ram Das langar of the Golden Temple, gurdwara Ber Baba Buddhaji near Chabal (Amritsar) and gurdwaras in Khadoor Sahib, Goindwal Sahib and Tarn Taran. Devotees remained busy all night at these shrines, preparing the langar. Confirming the dispatch, SGPC publicity in-charge Kulwinder Singh told HT that 25,000 food packets were prepared at the Golden Temple and other shrines. Each packet, wrapped in aluminium foil, contained four large-sized paranthas prepared in desi ghee, besides cooked vegetables such as potatoes and pickle. He said each packet had sufficient food to feed two persons.

“On Saturday, we will airlift 50,000 food packets, which will be prepared in various shrines in the night. This exercise will continue every day, with the number of packets likely to increase,” he added, referring to SGPC chief Avtar Singh Makkar’s statement that help to J&K flood victims would continue till the situation normalised.

The entire SGPC staff has decided to donate their two-day salary of the current month to the J&K government’s flood relief fund. Meanwhile, the Indian Air Force (IAF) has indicated that it might spare a cargo plane for the SGPC from Saturday onwards for airlifting relief material to Srinagar. Currently, the gurdwara body is paying around Rs27 per kg for the transportation. More than 50 quintals (5,000 kg) of food was sent on Friday.

About 16 senior SGPC officials, including secretary Dalmegh Singh, are already in Srinagar.