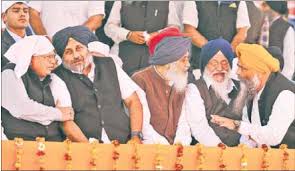 Comments Off on Now BJP, Congress row over memorial to terrorism victims 453 Views

Amritsar, Punjab: Even as the Operation Bluestar debate is yet to die down, another row on a memorial to terrorism victims has cropped up.

Talking to the mediapersons here today, Congress candidate Capt Amarinder Singh said he favoured a memorial to 35,000 persons killed during the dark days of terrorism.

He questioned BJP candidate Arun Jaitley’s “silence over the killing of 35,000 innocent Hindus during militancy in Punjab”. He said it seemed that Jaitley was afraid to annoy Akali leaders.

To a question on the SGPC honouring assassins of Indira Gandhi and Beant Singh, he said he wanted to know Jaitley’s stand on the issue.

“The BJP and Jaitley owe an answer to the people since the BJP is a partner of the Akali Dal which controls the SGPC,” he maintained. He accused Chief Minister Parkash Singh Badal of double standards. Badal, he said, had got a building raised in memory of Operation Bluestar but was “opposed to raising one for the victims of terrorism”.

At a press conference here this evening, Jaitley asked Amarinder as to why he had not raised a memorial to those killed during miltancy during his tenure as Chief Minister. “We have made one in the shape of Khanna Smarak in Amritsar,” he said.

Avtar Singh Makkar, SGPC chief, refused to comment on the matter. Senior SAD leader Daljeet Singh Cheema said the Congress had in the past created a divide in Punjab which had caused a huge loss to the state and

” it is again conspiring to incite communal passions for narrow political gains”.

Previous: Jaitley dubs Amarinder ‘monarch in democracy’
Next: Highlighting the tenets of Sikhism through film