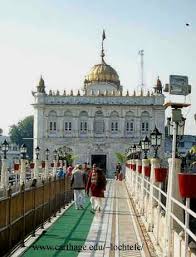 Amritsar, Punjab: On the first day of 2014, all roads and even small streets led to the Golden Temple. The New Year rush for blessings beat the pilgrim numbers of even Diwali, Gurpurb and Baisakhi, considered more important occasions.

The crowd was not around just the Parikrama and the path to the sanctum sanctorum from Darshni Deori. It started from the shoe houses around the shrine. Thanks to the high enthusiasm and zest of the sewadars that the thousands of shoes received were all kept safely and returned.

The outpouring of devotion inside made the first-time visitors awestruck. “My family is in Amritsar for the first time, and visiting the Golden Temple on New Year has exceeded all our expectations,” said Peter Anderson, a tourist from Perth, Australia. He captured the grand rush in his camera. He was in a traditional Punjabi kurta pajama and his wife was in a Punjabi suit. “When in Punjab, do as Punjabis do,” she said.

For paying obeisance at the sanctum sanctorum, most pilgrims had to wait for hours in the queue that seemed neverending. The waiting public was served water. At the Karah Parshad counter, from where pilgrims take sweet offerings to the sanctum sanctorum, the waiting was beyond an hour. “I have no clue when my turn will come but patience is a virtue more than ever,” said Sarabjit Singh, a young man in the queue.

The lang ar ( community kitchen) team, like every special occasion, served the day’s special food of hot jalebi and kheer (rice pudding garnished with rich dry fruits) continuously. “Our two capacious halls remained packed all daym” community kitchen manager Harpreet Singh said in the evening. “The sewadars and the devotees who volunteered to do free service proved their efficiency and their devotion to serve the pilgrims,” he said, adding: “Every year, the New Year rush of devotees is reaching a new high number.”

The narrow streets around Har mandar Sahib that led also to Gurdwara Shaheedan were decked up with colourful buntings. The streets’ typical markets teemed with village shoppers who were in the festival mood. There were New Year discounts to attract them. Some shopkeepers in the streets around the Golden Temple hosted “tea langar” for the public. The tea was served in plastic cups and although most shops had dustbins outside to collect those later, only a few individuals made a point to use them, which made the streets untidy. “We don’t use the dustbins placed before our eyes. Are we civilised?” asked retired teacher Balrajdeep Singh, who was pained to see all the littering.