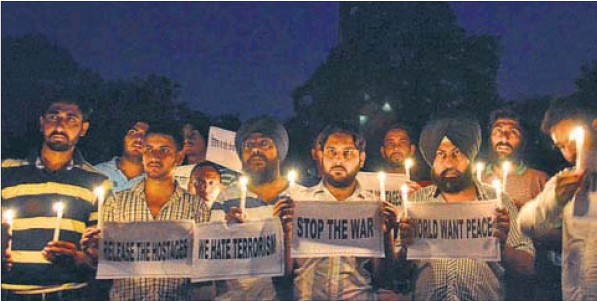 Amritsar, Punjab: As situation worsens in Iraq, more families of Punjabi youths stranded in the civil strife-torn country have begun to surface. On Thursday, four such families from Talwandi Jheera village in Gurdaspur, whose kin were working in Mosul, reached the Golden Temple to solicit divine intervention for the safety and well-being of their loved ones.

The Punjabi youths, who had invested their families’ savings or sold off their lands in search of greener pastures in Iraq, are now stranded there to the dismay of their families.

While most of them have lost contact with their kin in Iraq over phone, a ray of hope shone for the troubled families as two of these were able to get in touch with their lads on Thursday.

Relatives of Kuljit Singh, a resident of Talwandi Jheera, who were among the four families from Gurdaspur that offered prayers at the Golden Temple, said that they were able to talk to him over the phone on Thursday morning. “Our son, who had migrated to Iraq just two months ago, works at a hospital there and he told us that he stranded in the hospital where he works as the situation is too risky to step outside,” said Wassan Singh, his father.

They were accompanied by the family members of Dharminder Kumar, who went to Iraq around 10 months ago and has reportedly been abducted, besides the families of Jasbir Singh and Gurmukh Singh.

“When I last spoke to him, Dharminder informed me that his company had posted him at a far-off place. I have not been able to speak to him for the past almost two weeks,” said an apprehensive Kanwaljit Kaur, mother of Dharminder.

Hailing from a poor family, Gurmukh Singh too had migrated to Iraq five months ago in search of greener pastures, which eluded him. “At present we have no knowledge about his whereabouts and are concerned over his well-being,” said Gurmukh’s father Baldev Singh.

Shanti, mother of Jasbir Singh, who too had gone to Iraq in search of greener pastures, said that she was able to speak to her son on Thursday. “He said that he was fine, but did not have his passport with him because of which, he could not return home,” she said.

Meanwhile, Dr Raj Kumar Verka, vice-chairman, National Commission for SC/ST, said that all these youths are from backward families. “They sold their family land holdings and invested their savings in search of better-paying jobs in Iraq, but did not get what they wanted,” he said.

“I have written to Prime Minister Narendra Modi and Punjab chief minister Prakash Singh Badal, seeking measures for their rehabilitation,” he added.

A report from Batala said Dr Verka visited the houses of the four youths in Talwandi Jhiuran village and assured their families ll possible support for the safe return of their kin.

After visiting these families, Verka said that he had contacted the external affairs ministry officials and had conveyed their concern to them.

He also urged the union government to rehabilitate all these youths after their return to India, as they had went to Iraq after taking huge loans by mortgaging their houses and land because they come from very poor families.

Verka said he had also talked over phone to Kuljeet Singh, one of the stranded youth in Iraq, who requested him to secure his safe return.

Kuljeet pleaded that the Indian government should take up the matter strongly with its Iraqi counterpart and get them rescued at the earliest.

Previous: Akali Dal Amritsar lashes out at SGPC
Next: Sikhs support during war is highlighted.