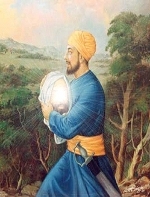 Comments Off on Memorial demanded to honour the services of Baba Jiwan Singh Ji. 1,483 Views

Amritsar, Punjab: According to media reports the descendants of Baba Jivan Singh have demanded a memorial for him at Gurdwara Sisganj Sahib in Delhi.

“We have been urging Delhi Sikh Gurudwara Management Committee for the past 15 years to erect a memorial or construct a gate in memory of Baba Jivan Singh, but nobody has heard us so far,” chairman, Shaheed Baba Jivan Singh Nishkam Sewa Society, Amrik Singh Shergill, reportedly told media at Amritsar on August 23.

Baba Jivan Singh was born as Jaita to father Sadanand and mother Premo in 1649. He had brought the head of ninth Sikh Guru, Sri Guru Teg Bahadur Ji, who was martyred at Delhi on the orders of Mughal emperor Aurangzeb, to Anandpur Sahib, traveling a distance of 483 kilometres. To recognise his services, Sri Guru Gobind Singh honoured him with title of “Rangreta Guru ke Beta.”

Amrik Singh said he would be taking a Chetna March to Delhi on September 3 to celebrate the birth anniversary of Baba Jivan Singh on September 5.

“For the first time, we have come out in open to express our demand. We are also giving a memorandum to governor of Delhi as well as to chief minister, Punjab, Parkash Singh Badal,” said general secretary of society, Kashmir Singh Randhawa.

He alleged that there used to be a bunga (mansion) of Rangreta Sikhs near Darbar Sahib complex, but it was demolished. “We have also demanded from SGPC to re-erect the Bunga Rangreta Sikhs to restore the honour of Baba Jivan Singh,” he said.

After submitting the memorandum, they would wait for some time before chalking out next course of action if their demand was not met, Randhawa added.