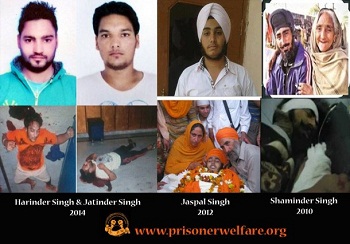 Ludhiana, Punjab: On 27th September 2014, Ludhiana Police as well as a member of the ruling Akali Dal (Badal) and some other ‘private armed persons’ raided the house in Jamalpur of brothers Harinder Singh (25) and Jatinder Singh (24), where they had been living for the past two months.

Earlier, Machhiwara police had registered a false case against the victims for attempted murder. This is widely believed to have been a political manoeuvre. When the brothers, who were unarmed, found the Police were at their door, they tried to escape but they were shot in the head and killed by the Police party. An eyewitness said the policemen entered the building by scaling the wall of a neighbouring house.

Initially, the incident was termed as a ‘police encounter’ by the Punjab police but afterwards the police officers started admitting that it was a case of cold blooded ‘murder.’

These kinds of inhumane tactics have been used against the Sikhs in Punjab for over three decades. Countless innocent young lives have been lost and the Punjab Police, as well as high ranking officers such as Sumedh Saini and top Punjab Government Officials such as Izhar Alam, have blood soaked hands.

A terrible precedent was set in the late 80′s whereby the Police are able to target’ whoever they wish and either throw them in prison under false charges, or simply dispose of them with complete impunity. SOPW provides support and helps fight the legal cases for 100′s of innocent Sikhs who have been made a target of State brutality. This new murder case of two innocent young brothers highlights why it is vital we raise awareness and continue the fight for justice. When you have known murderers sat in some of the top positions of the State, is it any wonder that the corruption filters all the way through the system?