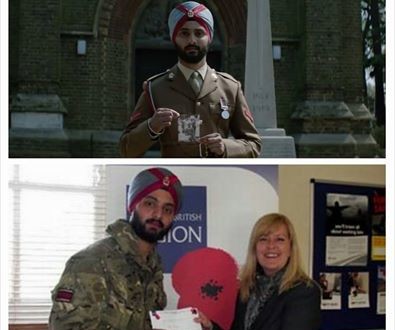 Lance Corporal Harmeet Singh – the first Sikh in his regiment – can be seen paying tribute to a fallen soldier bearing the same surname.

Comments Off on Lance Corporal Harmeet Singh – the first Sikh in his regiment – can be seen paying tribute to a fallen soldier bearing the same surname. 240 Views

UK: A proud soldier from Thornaby is featuring in a national campaign to remember every British and commonwealth soldier killed in the First World War.

Lance Corporal Harmeet Singh, 23, currently based at Northallerton, can be seen on TV screens paying tribute to a fallen soldier bearing the same surname.

Lance Corporal Singh, who married wife Ramandeep Kaul in March this year, shocked his family when he decided virtually overnight three years ago that he was joining the Army.

He said: “I used to work in a care home and never had any intention or thought about joining the Army. In 2011 I saw a documentary about Sikhs in World War One and Two. I previously hadn’t known about the part Sikhs played so I was quite shocked to see that.

“I basically decided then that I wanted to follow in my ancestors’ footsteps. The courage and discipline they displayed in the wars was an inspiration. The next day I was in the careers office.

“I did give my family a bit of a shock but I think they’re proud of me.

“I’m the first Sikh in my regiment.”

Lance Corporal Singh, part of the Queen Alexandra Royal Army Nursing Corps, was approached by the Royal British Legion to take part in the 60-second advert, filmed in London, after his fundraising work selling Sikh poppies in his community.

The advert, which will be on a number of channels including ITV until next Friday is part of the centenary anniversary year national Every Man Remembered campaign, led by The Commonwealth War Graves Commission (CWGC) and The Royal British Legion (TRBL), which aims to encourage people to remember every serviceman and woman who gave their life during the First World War conflict.

The idea was inspired by a 14-year-old girl scout who visited Tyne Cot Cemetery last year and wrote to TRBL asking why only certain solders had flowers on their gravestones.

A website has also been set up as part of the campaign, where people can find information, search for family connections, donate or upload their own stories.

Lance Corporal Singh added: “To contribute to this campaign meant a lot to me, because it’s why I joined the Army.”