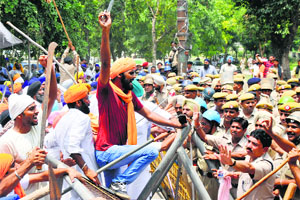 Kurukshetra, Haryana: Tension escalated in Kurukshetra district today as members of the newly formed Haryana Gurdwara Management Committee (HSGMC) clashed with the police after they ‘forcibly’ tried to take control of Gurdwara Chhevin Patshahi where SGPC task force personnel were already present in large numbers. The HSGMC had called a Sikh Sabha during its morcha near Gurdwara Chhevin Patshahi. Adamant to take control of Haryana gurdwaras, HSGMC supporters made several attempts to cross barricades between 11.55 am and 1.40 pm. The situation became volatile at 1.55 pm when sword-brandishing HSGMC supporters started pelting the police with stones. The police used water canons, tear gas shells and cane charge to disperse the protesters. Many policemen, mediapersons and HSGMC members were injured in the melee. The police chased away the agitators from the venue till Dera Karsewa, 500 meters from Gurdwara Chhevin Patshahi. This was for the first time since Saturday when the HSGMC managed to get Haryana Sikh sangat’s support as the attendance touched the 1,000 mark.

Sources said six mediapersons, 24 policemen and dozens of HSGMC supporters were injured. “The HSGMC members made a forceful attempt to enter Gurdwara Chhevin Patshahi. They pelted security personnel with stones and also indulged in a scuffle. The police used water canons, tear gas shells and cane charge to disperse them,” Kurukshetra Superintendent of Police Ashwin Shenvi said. The announcement made by HSGMC chief Jagdish Singh Jhinda around 1.40 pm took everyone by surprise. Jhinda said: “The HSGMC has taken control of Cheeka Gurdwara in Kaithal. We all should move there as our people need us. Aaj ka maksad pura hua, wahan chal ke sewa sambhalo,” said Jhinda.

Addressing the Sikh Sabha, Jhinda said: “We are moving with a planning and we will succeed. A well-planned strategy is the need of the hour as our struggle is against Punjab Chief Minister Prakash Singh Badal and SGPC president Avtar Singh Makkar. We will take control of this gurdwara also as we have taken charge of Gurdwara Chhevin and Novin Patshahi in Gulha Cheeka.” Despite repeated pleas by HSGMC chief Jhinda and senior vice-president Didar Singh Nalvi, the agitators were adamant of taking control of Gurdwara Chhevin Patshahi here. Talking to The Tribune, Jhinda said: “Parkash Singh Badal is responsible for the situation. Members of his task force started pelting police personnel with stones when we were about to leave for Gulha Cheeka.” “I have spoken to the Kurukshetra Deputy Commissioner and government officials to get Haryana gurdwaras vacated to maintain peace,” he said.