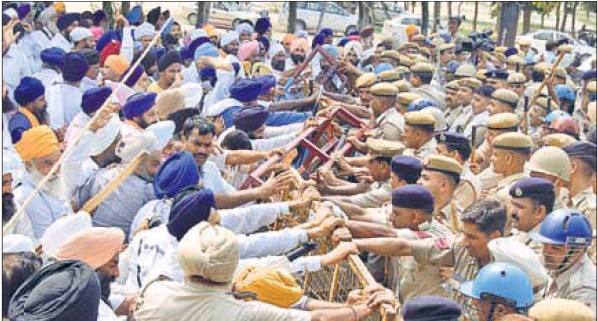 HSGMC dharna outside gurdwara keeps Kurukshetra on the edge

The HSGMC has decided to wrest control of 52 gurdwaras, including eight with historical value, from the Shiromani Gurdwara Parbandhak Committee (SGPC) but Sikhs leaders of Haryana have concentrated on the Kurukshetra shrine first. Information from Kaithal and Yamunanagar is that there is no HSGMC protest there.

Leaders of Shiromani Akali Dal and Nihang groups; besides security task force of the SGPC, are deployed in large numbers at different gurdwaras, including the key one in Kurukshetra. Karnal range inspector general of police Rajbir Deswal confirmed that there were inputs that the people inside the SGPC-run gurdwaras were armed.

“Police are maintaining a close watch on the law-and-order situation and not focusing on flushing out the occupants,” said Deswal, adding that the situation in Kurukshetra, Kaithal, and Yamunanagar was under control. He also confirmed that there was no complaint from either the SGPC or the HSGMC about any intimidating of supporters. The participants of the Kurukshetra sit-in raised slogans intermittently to seem prepared to barge into the gurdwara, and HSGMC president Jagdish Singh Jhinda and other leaders had to remind them repeatedly to keep peace.

On Sunday, the HSGMC supporters carried swords, sticks and spears to the protest site. “Punjab CM Parkash Singh Badal’s party and SGPC are trying to instigate us but we have to maintain order. The Haryana government is duty-bound to ensure transfer of gurdwara administration to HSGMC and we have to wait,” Jhinda told the gathering of nearly 200 Sikhs. He said the option to storm the gurdwaras would be the last. “It is our duty to ensure we don’t lose the 14-year battle for an independent committee by any step in anxiety.”

HSGMC senior vice-president Didar Singh Nalwi asked the district administration to go inside the gurdwara to spot armed outsiders. “Check their arms licences; take action, if necessary,” he said. On SGPC and SAD’s offer of dialogue, Nalwi said: “SGPC and Akal Takht jathedar never listened to us in 14 years. Now when the Haryana assembly has listened, they talk irrelevantly about talks after ex-communicating three Sikhs and refusing to accept the HSGMC, a legal entity.”

The HSGMC leaders expected a huge gathering at the sit-in on Sunday in but the attendance was thin. On Saturday evening, they had appealed their supporters to gather in the holy city. An HSGMC leader said, “Rumours of baton-charge might have kept the sangat away.”

Previous: Proposal to develop Anandpur Sahib as tourism hub
Next: Seventy STARAE Scholars have Marched on to their New School, Will you Support Them?