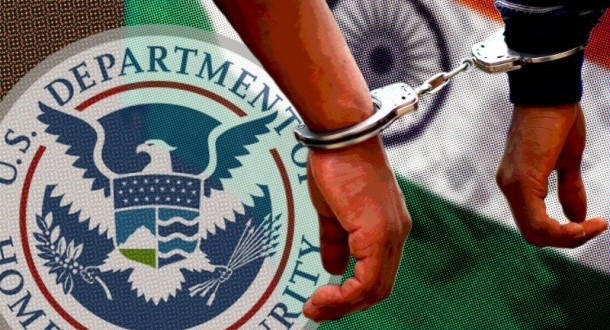 How the U.S. Sold Out Indian Asylum Seekers on the Border

Comments Off on How the U.S. Sold Out Indian Asylum Seekers on the Border 675 Views

El Paso, Texas, USA: Dozens of Sikh men fleeing political persecution showed up on the Texas border last year and the U.S. Immigration allegedly outed them to their home government.

This April, more than 40 detainees at a U.S. Immigration and Customs Enforcement processing center in El Paso went on a hunger strike. The men, all of them Sikhs from India had been held captive for close to a year after they had crossed into the U.S. from Mexico, walked up to a Border Patrol agent, and asked for political asylum.

Back in their villages in the northwest state of Punjab, the men had been harassed by political opponents for attending rallies for Shiromani Akali Dal, a minority Sikh-interest party also known as Mann. When they went to the local police for help, they said, the authorities instead threatened them with arrests and violence. Smugglers, known as “agents” in India, told the men that for a price they could transport them to the United States and that getting asylum would be easy. Fearing for their safety, the men indebted themselves and their families to the smugglers and embarked on a transcontinental journey, hopping across Asia and Central America, then up through Mexico and over the border.

Last fall, within a three-week period, around 70 Sikh men showed up on America’s southwest border and asked for asylum. Within 48 hours of being detained, each of them passed their “credible fear” interviews, establishing that they had a reasonable fear of persecution if they returned home. This made them eligible to be released to a relative while awaiting an immigration hearing. Yet every one of their parole requests was denied. Some of the men were deported, while the rest remained in detention.

By April, the jailed men had grown hopeless, desperate, and convinced that their parole requests were not getting legitimate consideration. So, in protest they stopped eating. During the first few days of the hunger strike, according to a lawyer representing some of the men, ICE agents threatened to force-feed the detainees. When that tactic failed to break the strike, the Sikhs received a visitor: a representative from the Indian consulate in Houston. According to statements from the detainees and an attorney representing some of them, N.P.S. Saini was called to convince the men to end their hunger strike, give up their asylum claims, and go home. If true, this would be a violation of American laws on amnesty, which explicitly prohibit the disclosure of any information that links an asylum seeker’s identity to the fact that they’ve applied for asylum.

“He told us, India is a good country, go back to India,” Buta Singh, one of the hunger strike participants, told The Daily Beast. Singh said Saini told the men that he had deportation papers ready if they wanted to go back to India. “We asked, If we go back, can you protect us from harm?” He said, “No. There are so many people in India, we can’t be responsible for all of them.”

Dallas-based attorney John Lawit represents Singh and seven of the other Sikh men, two of whom are still detained in El Paso. According to Lawit, Saini went even further, berating the men in Punjabi and telling them that they weren’t even fit to immigrate to the U.S. because they are farmers, not doctors or engineers. Some of the other detainees told Texas Monthly the same thing.

The hunger strike ended shortly after Saini’s visit and Lawit was able to get Singh transferred to a detention center in Washington state on the basis that Singh’s identity had been revealed to the government from which he was seeking asylum. Not long after his arrival in Washington, Singh’s parole was granted and he was released on bond to live with family in Seattle while he awaits an immigration hearing.

Beyond securing release and, eventually asylum for all of his clients, Lawit also wants repercussions for the ICE against who, he says, violated U.S. law and United Nations protocol by outing his clients and the other asylum seekers to a representative of the government they’re attempting to flee. On Friday, Lawit submitted a complaint to the Immigration Office for Civil Rights in Washington, D.C. At the very least, he wants the ICE agents who arranged the Indian consul’s visit to be fired, and he wants all of the Sikh men—including those who’ve already been deported—to be allowed to submit new asylum applications. At best, he’d like to see the agents indicted on obstruction of justice charges for attempting to interfere with the detainees pending immigration proceedings.

“ICE lost control of itself and conspired with a foreign government to destroy the asylum rights guaranteed to detainees,” Lawit said. He also noted some of his clients family members in India, as well as the men who were deported, said they’ve received threatening phone calls from Indian authorities. “The reason we have confidentiality is so that people are not forced to go home.”

The U.S. Code Of Federal Regulations explicitly prohibits the disclosure of any information that links an asylum seeker’s identity to the fact that he or she has applied for asylum. Without the written permission of the asylum seeker, information pertaining to their application may not be shared with anyone outside the U.S. government. Singh said he did not give ICE permission to reveal his identity to anyone, rather that he was informed several days into the hunger strike that a representative from the Indian consulate would be coming to talk to him and the other detainees. Neither the Indian consulate nor a representative from ICE in El Paso responded to requests for comment on this story.

Lawit believes Saini’s visit to the detention center was the work of a few “rogue officers” who are “an insult to all the good officers who work very hard at their jobs.” But the Sikhs prolonged detention—despite the finding that they had credible reason to fear deportation—is emblematic of El Paso’s unique approach to asylum claims.

Immigration judges in El Paso have among the lowest rates of asylum approval in the country. In 2013, for example, 53 percent of the total asylum applications filed in the U.S. were granted. Of the 87 that were filed in El Paso, 100 percent were denied.

There is no explicit difference between asylum policy in El Paso and the rest of the country. Rather, immigration attorney Carlos Spector says,”it’s a de facto policy that has more to do with El Paso’s location than anything else.”

“I call it the Mexican Policy: aggressive discouragement at every level, from agents on the border telling people not to apply, to prolonged detention,” Spector told The Daily Beast. “What’s happening to the Sikhs is emblematic of what they do to Mexicans, what they are doing to the Central Americans. It’s a culture of No.”

Lawit agrees, which is why he’s trying to get the clients of his who are still detained in El Paso relocated to detention centers in other parts of the country, where they are more likely be given parole.

“In El Paso, the policy is to lock everybody up and throw away the key,” he says. “In the rest of the U.S., strangely enough, they obey the law.”

For the Sikh men, in particular just filling out a valid asylum application in El Paso, where skilled Punjabi translators are hard to come by, is a challenge. Lawit says he pays a Punjabi-speaking taxi driver from Albuquerque $500 a day to come to El Paso and talk to his clients when he has to meet with them, but the taxi driver can only speak the language—he can’t read or write it. The cheapest translator Lawit says he’s been able to find charges $1,000 a day, which none of his clients can afford. He believes detaining these men in a part of Texas where they would have no access to Punjabi translators was a deliberate decision on the part of ICE to impede their asylum applications.

The El Paso brand of deterrence is just as much directed at smugglers as immigrants, if not more so. There is nothing illegal about going up to a Customs or Border Patrol official immediately upon entering the U.S. and asking for asylum. This can be done at the airport the same way it’s done at the border—but obtaining a travel visa to fly to the U.S. can be difficult. So smugglers all over the world make their living convincing people as far away as India or China to pay crippling fees (sometimes as much as $50,000 or $60,000) to get their children to the border. Between October 1, 2013 and July 31, 2014, U.S. Border Patrol apprehended 1,382 people from India and 1,500 from China.

The Chinese and Indian smugglers’ promise of easy asylum echoes that of smugglers in Central America, who are responsible for the tens of thousands of “border kids,” unaccompanied minors from El Salvador, Guatemala, and Honduras who have flooded the southwestern border this year. As the 37 Sikh men still sitting in a detention center in El Paso can attest, it’s a promise not based in reality.

“It’s a desperate situation for parents to let their kids come to the United States. It becomes equally as desperate to pay the smugglers,” Lawit says. “If I could deter even one family from doing this, it was well worth the time.”

Previous: SAD (Badal) appears to have forgotton its promise of formation of SIT on Nov. 1984: Advocate Phoolka
Next: Sikh Group Urges Obama to Cancel Modi’s Visit