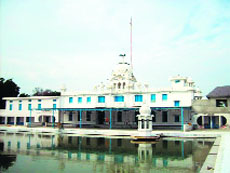 Historic Gurdwara Buddha Johad to get a facelift

Abohar, Rajasthan:  The Rajasthan government has released Rs 51 lakh to the Department of Tourism for giving Gurdwara Buddha Johad in Raisinghnagar segment of Sriganganagar a facelift even as the row over the management of the gurdwara remains unresolved.

In the first phase of the project, the construction of boundary wall, beautification of the park, putting up of lights, plantation, widening of road up to 100 feet and the construction of a road linking the gurdwara complex with Dabla village will be taken up. The renovation of the “sarovar” (pond) is scheduled for the next phase.

The gurdwara stands as a memorial to Sukha Singh and Mehtab Singh, who brought here the head of Massa Ranghar, guilty of insulting the Golden Temple in Amritsar. A trust was formed and registered with the Dev Sansthan Board, Rajasthan, to look after its management about four decades ago. The Shiromani Gurdwara Prabandhak Committee

(SGPC) has no jurisdiction over Sikh shrines in Rajasthan.

For the past two years, a section of the Sikh community had been pleading with Akal Takht to dissolve the trust to form a new managing committee. The trust members, including Gurpartap Singh, Paramjit Singh and Baldev Singh Brar, explained in December last year that any change in the structure of the management could invite legal complications as enshrined in the Dev Sansthan Board constituted by the state government. “We have maintained transparency and served as true devoted Sikhs, they claimed.”

Akal Takht had in January this year declared the trustees as “tankhayia” for not responding to calls. Only one of them has so far appeared before Akal Takht for an apology, sources said.

Notably, Sant Fateh Singh (1911-1972), a key figure in the Punjabi Suba movement had also served in Gurdwara Buddha Johad for a long time. Locals said as it was the first ever renovation work being taken up by the state, the gurdwara would attract a lot of devotees, including NRIs.

Previous: Evicted Sikh farmers in Haryana to boycott polls.
Next: The political war between Congress and BJP on the cost of Sikhs