Amritsar, Punjab: The restoration work on the interiors of the Golden Temple’s first floor is inching towards completion. Sources said the gold work had been restored on the walls and roofs of the ‘parikarma’. Now only arches were left. Similarly, restoration work is almost 30 per cent done on one of the staircases leading from the first floor to the second floor of the shrine.

There are a total of three staircases, which take pilgrims from the first to the second floor. The restoration is to be carried out in two of these as there is hardly any artwork left in the third one due to ‘kar sewa’ carried out in the past.

However, the work on the wall paintings as well as the gold work in the area where Guru Granth Sahib is installed on the first floor is yet to start. There are reports that the restoration work on the entire first floor is most likely to be over by December-end.

The work had slowed down a bit in the festive season as there was a huge rush of devotees. At present, a team of seven conservators led by Chandigarh-based Namita Jaspal is working on the project.

A special gold paint manufactured by a European firm is being used in the conservation work. It is 22 carat gold and 10 gm of this paint costs around Rs 1 lakh.

The gold work inside the shrine had suffered damage with passage of time as well as pollution.

It witnessed flaking and tarnishing at various spots. Besides, the gold work had also been painted with brown colour in a few areas probably during a ‘sewa’ performed in the past. The gold work is primarily on the roof and the arches of the holy shrine. In the first phase of restoration, the conservation experts had restored the precious art work on the walls of the first floor, which had infused a fresh lease of life into the wall paintings that regained their pristine grandeur.

The paintings involved the most intricate work and it took the team almost six months for restoration. There was considerable flaking in some areas and artists were engaged to “reconstruct” the lost part of the wall paintings while taking a clue from the existing pattern. 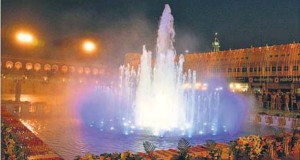