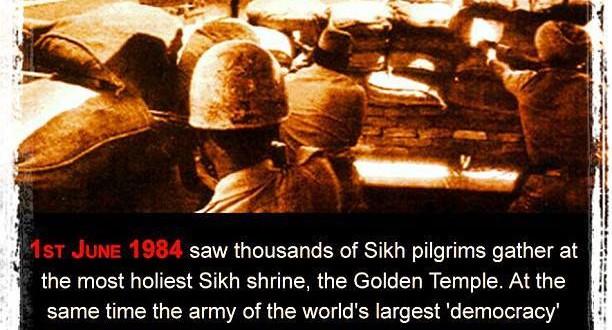 1 June, 1984 – Piecing together the evidence of various eye-witness and also second-hand socurces, such as Kirpal Singh, President of the Khalsa Dewan, Amritsar and S.S. Bhagowalia, advocate at Gurdaspur and Vice-president for the Association for Protection of Democratic Rights (Punjab), the following picture emerges as to what happened at Sri Harmandir Sahib from 1 June, 1984. It is really amazing how, except for some minor details, the accounts of different persons interviewed separately tally so closely with regard to the date, the time and the description of incident 1 June, 1984.

The AISSF Member, Duggal, the girl student, Sevadar Prithipal Singh and Baldev Kaur all said the the Sri Harmandir Sahib was fired at by security forces from the outside for the first time on June 1 itself, not June 5 as claimed by the White Paper. According to the AISSF member,

“At 14.40 in the afternoon of June 1, suddenly the CRP without provocation started firing, aiming at the people inside the Parikarmas. There was no firing, from inside the Golden Temple. The firing by the C.R.P. was on the Harmandir Sahib and the Manjih Sahib. The firing continued till about 8 p.m.”

Sevadar Prithipal Singh added that the shooting which started from outside, was not preceded by any warning.

Devinder Singh Duggal’s account is extremely detailed and lucid. “By the end of May, it was widely known that the Army is going to attack the Golden Temple, and on that account there was tremendous tension in the entire city and its surrounding areas. The worst fears of the people came to the surface when on 1st June, the security forces which had beseiged the Golden Temple for months together and had made strong fortification on the multi-storey buildings all around it, suddenly started firing in side the Golden Temple. The firing sarted at 12.30 p.m. and continued for a full 7 hours. What was worse was that Harmandir Sahib was made the main target of this firing. I took shelter along with my staff behind the steel almirahs of the Library, one of the bullets pierced through three almirahs and landed on the fourth and we had a narrow escape.”

Duggal continues – “Not a single shot was fired from inside the complex. When I asked some of the boys as to why they did not answere the firing, they replied that they were under strict orders of the Sant not to fire a single shot unless and unti ll the security forces or the Army entered the holy Golden Temple. In the evening, when I heard in the news bulletin that there was unprovoked firing from inside the Temple, but that the security forces showed extreme restrain and did not fire a single shot, I was surprised at this naked lie. The very fact that as many as eight persons, includeing a woman and a child had been killed inside the Golden Temple complex and there were as many as 34 big bullet wounds on all sides of the Harmandir Sahib completely belied the Government’s version. I asked Bhan Singh, Secretary, S.G.P.C., to do something to refute this falsehood. He said that nothing could be done because all links with the outside world had been snapped.”

According to the girl student, curfew was clamped soon after the firing started. She confirmed the killings :

“Authorities had said none had died, but I dressed the wounds of 3 men who died later in front me in Guru Nanak Nivas.”

That the curfew was lifted soon after the firing stopped is indicated by the AISSF member, who said,

There is no doubt then that security forces (C.R.P.) fired on the Sri Harmandir Sahib on 1 June 2014 itself and the news over the A.I.R. that there was unprovoked firing from inside was a blatant lie. However, most official versions maintain a meaningful silenc e about the happenings of June 1. For them, as for example, with the Government’s White Paper, the story begins on June 2 with the Government of India deciding to call in the Army in aid of civil authority in Punjab, with the object of “checking and controlling extermist, terrorist and communal vioulence in Punjab, providing security to the people and restore normalcy.”

How much security the Army succeeded in providing to the people and how much normalcy, they were able to restore, is however, another matter.