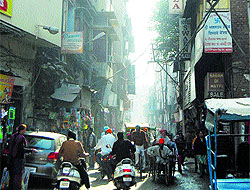 Comments Off on Extortion call to SGPC: Hotels around Golden Temple searched 172 Views

Amritsar, Punjab: Taking no risk over an extortion call received by the SGPC from an unidentified person a couple of days ago, the Amritsar police on Wednesday searched hotels around the Golden Temple.

Though the police remained mum over the details, and played down the issue terming it a routine check, Amritsar commissioner Jatinder Aulakh admitted that the place was searched and the call was being investigated.

“Surrounding hotels were searched as a precautionary measure. We are looking at things closely,” added the commissioner. A police official told that the exercise was done to keep out suspicious visitors.

Police officials also held a meeting on Wednesday. The SGPC barred taking of handbags inside the shrine, after the call. Even small bags allowed for those entering to take a holy dip were checked thoroughly by the SGPC Task Force. SGPC remains tough with handbags.

The SGPC Task Force did not allow handbags on Wednesday. People were seen queueing outside the baggage counter. It was learnt that SGPC officials had a meeting with the police to discuss security details.