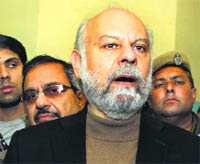 Amritsar, Punjab: Radical Sikh outfit Dal Khalsa today claimed that former R&AW officer B Raman had also revealed in his book that officers of the British Security Service (MI-5) visited the Golden Temple to assess the ground situation before giving their advice to then Indian Prime Minister Indira Gandhi prior to Operation Bluestar in 1984.

In a statement released here today, Dal Khalsa spokesperson Kanwar Pal Singh said Raman, who authored the book, ‘The Kaoboys of R&AW’, published in 2007, has revealed in his chapter, “The Khalistani Terrorism” (Page 96), that on the request of RN Kao, the then special adviser to the Indian Prime Minister, two officers of the British Security Service (MI-5) visited the Golden Temple as tourists and gave their advice to Indira Gandhi.

The revelations by British MP Tom Watson on the basis of the top-secret documents found at British National Archives, which have now been made public, have reinforced the disclosure made by former R&AW official, he added.

“One thing is now clear that the British Government was engaged and their advice was sought and the latter did oblige. However, there is a grey area as to what they had advised and whether that advice was taken into account or just ignored by Indira Gandhi. All these questions need clear answers,” he averred.