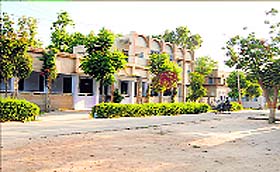 Comments Off on Elections at Sriganganagar Sikh institutes upheld 627 Views

Abohar, India: The Rajasthan Government has resolved the dispute over the election of managing committee to run Sri Guru Nanak Khalsa School and Colleges, Sriganganagar. The election was held on April 10. The election of Rajveer Singh of 38BB village as president, Mehal Singh Randhawa of 15FF village as secretary and Jastar Kaur as treasurer has been upheld. Lakhbir Singh Gill of 58RB village has been appointed rector.

The warring factions had formed separate managing bodies and submitted respective claims before the Sub Registrar, Sriganganagar. “After examining the constitution, the procedure adopted by the factions, the election of Rajveer Singh and others has been upheld,” official sources said. The institutes in question are Guru Nanak Khalsa School, Sri Guru Nanak Khalsa College and Post Graduate College.


President Giani Zail Singh was among scores of dignitaries to have visited the institutions. A large number of alumni of these institutions have served as high ranking offices in the state and central governments. They had expressed concern over the tug of war between the two factions for the past five years. About three years ago, the then Superintendent of Police Rupinder Singh had to intervene to prevent a violent clash between the factions.

The factions had also planned to hand over the institutes to the Shiromani Gurdwara Prabandhak Committee (SGPC). But the plan was dropped when experts warned that the institutes may lose affiliation with the university and the school may no longer be recognised by the state education board. The rules did not permit bodies from another state to meddle with the affairs of the institutes. The Sikh Sangat had also opposed the move, saying that the SGPC had done nothing to improve the community institutions in the region.

The new managing committee today assured to restore past glory and provide a congenial environment for studies.